U.K. consumer goods manufacturer Reckitt Benckiser (OTCPK:RBGPF)(OTCPK:RBGLY) continues to see uplift from the COVID-19 crisis, as shown in its recently released third quarter numbers. However, the effect is less than it was earlier in the year and its nutrition business continues its underperformance.

The Company Continues to Benefit from Pandemic Headwinds

The company manufactures a number of brands with clearly established connections to household hygiene in consumers’ minds, such as Lysol and Dettol. So it is no surprise that it has seen a sales benefit during the pandemic. This continued during the third quarter, when like for like revenue was 19.% higher in its hygiene division than last year. That is an impressive figure. Like for like revenue in its two other divisions also rose versus the prior year, though the health division growth is slower than it had been in the year to date.

It’s also worth noting out the impact currency shifts have on this global company: while like for like is a useful measure of business health, the key question for shareholders is how much coin comes into the company, and when taking exchange fluctuations into account, the nutrition division’s performance is actually less than last year. With significant swings in sterling, the dollar, the Chinese yuan and more in the current year, that is a substantial drag when Reckitt comes to convert profits into sterling. The company provided specific standalone guidance on this point here.

Performance continues to be very unevenly spread. While the company’s three geographic regions all did well, North America by far showed the strongest growth. That was led by Lysol, Finish and Airborne, according to the company. It seems fair to infer that the Lysol and Airborne surges have been motivated by the pandemic: while sales volumes may continue to be elevated versus their pre-pandemic level next year, I suspect that this year’s high growth rate may turn out to be a one-off phenomenon.

Note that Reckitt hasn’t purely benefitted from the pandemic. While hygiene brands such as Dettol have seen sales surges, it also owns the Durex condom brand. With many people locked down in recent months, condom demand had withered. It now shows signs of increasing again, with the Durex brand showing double-digit growth in the quarter. This was driven by some markets where lockdown restrictions were relaxed, but I expect to see similar firming in other markets in coming months. The company has also just launched its first polyurethane condom, which its thin fit should further improve performance in the Durex segment.

The question on the minds of investors eyeing long-term uptick in Reckitt’s performance under the current management, which remains fairly new, is how much of the recent strong revenue performance is due to structural shifts not the rather opportunistic COVID-19 uplift, and also how the profit line is faring as well as the revenue line. There are some positive indicators: a productivity program is said to be ahead of schedule, with £300m of savings in the year to date. E-commerce sales continued to grow, with 45% growth in the third quarter, and now stand at an estimated 12% of group net revenue year to date. I remain skeptical about whether that helps the company – I favor consumers goods company focussing on working with distribution channels not trying to run them – but that is the company strategy and they are performing well against it.

The company upgraded its full year outlook for like for like net revenue growth from high single digits to low double digits. While that is positive – and makes sense given the third quarter performance – there is no update to profit guidance, which is a bit disappointing for investors.

Reckitt Benckiser’s nutrition acquisition turned out to be a bit of a lemon. For now, it remains unclear whether the company is turning it around. This has been one of the biggest drags on the company’s shares – and the acquisition is the reason for the bloated debt burden which continues to drag on financial performance – so management needs to prove that it can fix nutrition to gain credibility longer term.

The quarterly performance was disappointing, and revenue reported in sterling continued to fall. 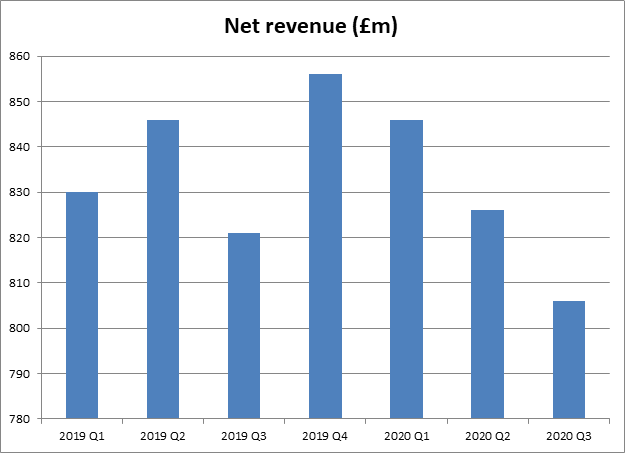 While the fall is not huge in percentage terms – this year’s third quarter was 98% of last year’s – it is still a fall, and the trend this year is not good. Bear in mind that this division includes Airborne, for which the company said there was “very strong demand” in the quarter, with revenue on that brand more than doubling. So the core problem – the infant formula business – may continue to be more problematic than is obvious from the numbers above. Travel restrictions seem to be heavily affecting this business, especially in its core China market. The company specifically called out difficulties in markets including a decline in sales in Hong Kong due to far fewer shoppers crossing over from mainland China and purchasing infant formula. Additionally, the pandemic is expected by the company to lead to a reduction in birth rates, a further headwind to the nutrition business which it explicitly called out.

Overall, there is little firm evidence to date that the baby and infant formula business is being turned around. While travel restrictions in a key market are outside the company’s control, they may hang around in some form for the foreseeable future. For now, there are few concrete indicators that the formula business (when stripped out from the reporting segment “nutrition”) is holding its own let alone improving. No matter how well the hygiene division does – and it is flying – the company needs to prove it has a plan to fix the formula business and have proof that it works before the shares deserve positive rerating.

I think Reckitt Benckiser is showing progress in key areas. It is more focussed than before and its hygiene brands are doing excellently, especially in North America. That is not purely by accident: the company deserves credit for building a brand portfolio well suited to the current consumer environment and responding well to the pandemic.

However, some of this gain – while welcome – is clearly opportunistic, and the formula business which carried such a high price tag continues to weigh down sentiment on the name. So, while I think a lot of work remains to be done, we are starting to see some signs of strategic recovery. At their current price of 7,090p, the shares trade on a p/e of 20x and yield 2.5% so I don’t see them as a value play. However, if the company can turn in another good quarter next quarter – which it may – it may merit reassessing its long-term valuation prospects. For now, although there is increasing evidence of growth, I remain neutral.

Editor’s Note: This article discusses one or more securities that do not trade on a major U.S. exchange. Please be aware of the risks associated with these stocks.

SVXY: More Upside Remains For This Volatility ETF
Week Ahead – The Final Stretch

Bitcoin: Don’t Panic, It Is…