The following analysis was presented exclusively to Insiders Forum members one month ago. The recommended stock in question has risen just over 10% over that time. However, since the shares still appear poised for upside over the longer term, we update our original investment thesis and present that research in the paragraphs below

One of the themes I have been playing successfully over the past two quarters is betting on an improving housing market given low mortgage rates and an exodus out of the larger cities in the United States post the COVID-19 pandemic. I recently opened a new position via covered calls in a new equity that should benefit as this theme continues to play out. A full investment analysis and recommended option strategy follow in the paragraphs below. 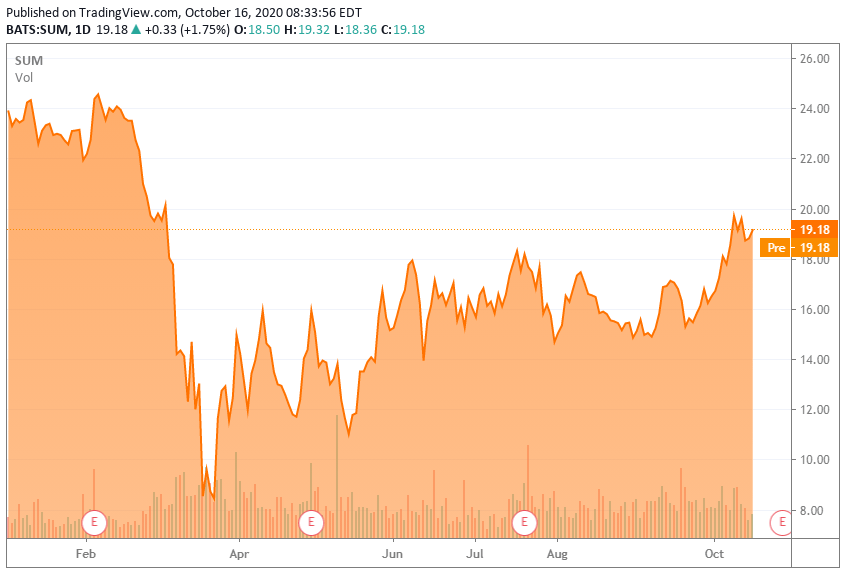 Summit Materials, Inc. (SUM) is a Denver-based construction materials company, providing its end users with 54.0 million tons of aggregates, 2.4 million tons of cement, 5.5 million cubic yards of ready-mix concrete, and 5.6 million tons of asphalt paving mix in its fiscal year (FY) ending December 28, 2019. These materials and products are produced across its more than 400 sites and plants in 22 states and British Columbia, which hold ~3.9 billion tons of proven and probable aggregate reserves. Summit was formed in 2009 and went public in 2015, raising net proceeds of $433.0 million at $18 per share. Its stock currently trades just above $19.00 with an approximate market cap of $2.25 billion.

Owing to transportation costs and physical constraints inherent in its products, the construction materials industry, for the most part, is highly fragmented and localized. There are ~1,465 companies operating ~3,710 aggregates quarries, ~5,500 ready-mix concrete plants, and ~3,500 asphalt paving mix plants in the U.S. The one exception is the small number of cement factories: ~91, of which Summit operates two. As such, with relatively undifferentiated products, companies compete primarily on price.

With those industry parameters, it makes sense that Summit grows through acquisition – which it has, purchasing over 70 businesses since 2009. In addition to macroeconomic factors, the company considers its post-acquisition position in the local market as a litmus test for a potential takeout target. If the business under evaluation will immediately place Summit in the top three in the local market or improve an already established top three position, it is a candidate for purchase. Management believes a top three ranking provides economies of scale and synergies, which support competitive pricing, profitability, and organic growth. In addition to acquisitions, Summit develops greenfield and brownfield sites in its existing markets. These strategies have allowed the company to grow its top line from $400 million in 2009 to $2.2 billion in 2019, becoming a top 10 supplier of aggregates and a top 15 cement producer. 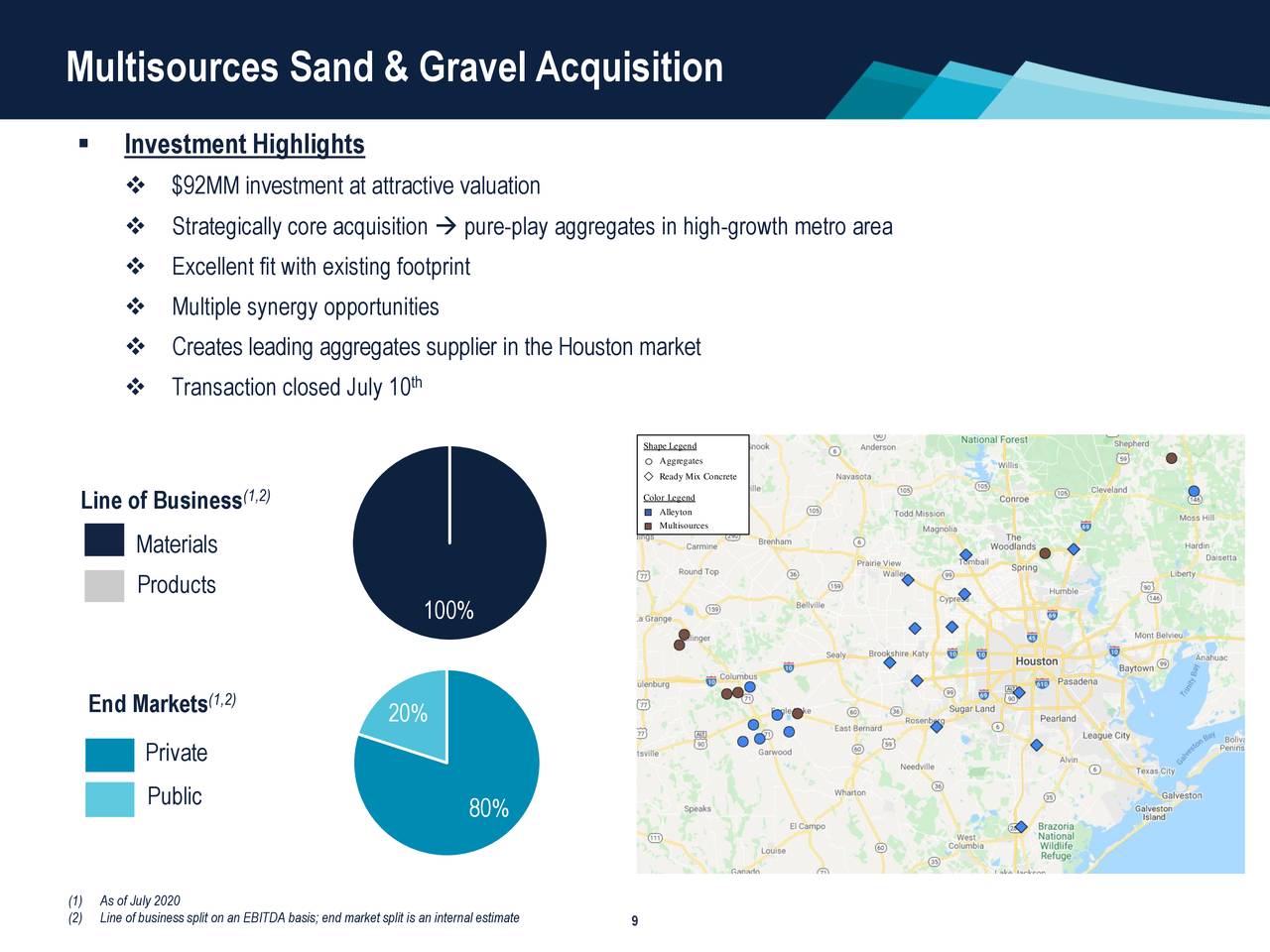 The West segment serves markets in nine states – including Texas and Arkansas – and British Columbia. It controls ~1.1 billion tons of proven and probable aggregate reserves as well as $610.6 million of hard assets (property, plant & equipment), accounting for FY19 revenue of $1.12 billion, or 51% of its total; and 40% of the company’s operating income.

The East segment includes operations in nine states covering the midwest and eastern sections of the country, which contain ~2.3 billion tons of proven and probable aggregates reserves and hard assets of $729.0 million. This unit was responsible for FY19 revenue of $809.1 million, or 36% of total; and 37% of its overall operating income.

Cement has an operating footprint in seven states along the Mississippi River, with two large cement plants and nine distribution centers. Its locations along the Mississippi are at a strategic advantage, allowing them to transport ~63% of their cement by barge. This segment holds 0.5 billion tons of proven and probable aggregates reserves and $600.8 million of hard assets, while generating FY19 revenue of $290.7 million, or 13% of total; and 23% of its total operating income.

From an end-user perspective, public infrastructure represented 38% of FY19 revenue with private construction (both commercial and residential) accounting for the balance. 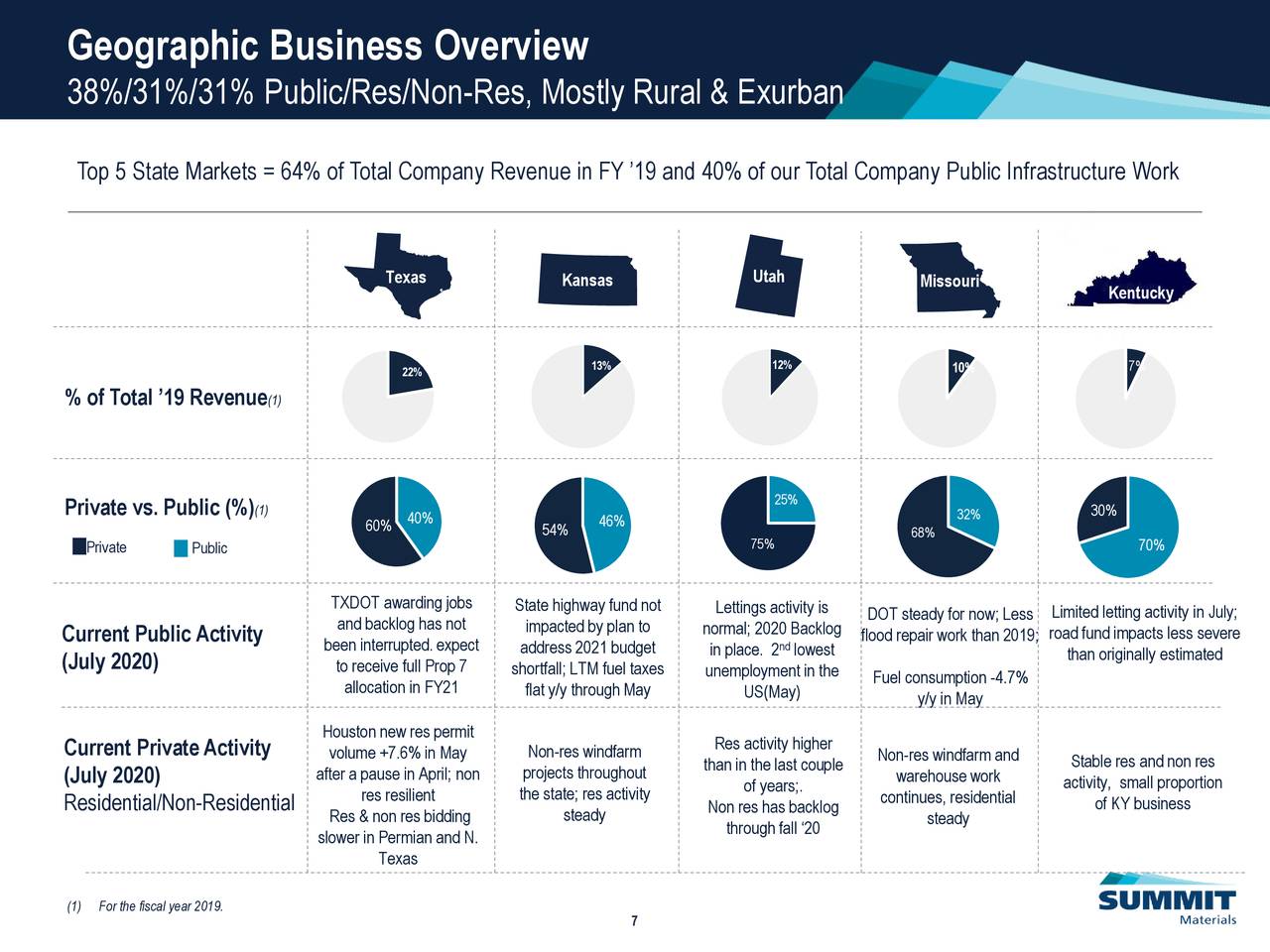 As such, Summit’s operational performance is dependent on its pricing power for its materials and products versus the input, freight, labor, and fuel costs, which are functions not only of the overall economy but also of the economies and public infrastructure projects in its biggest markets – and sometimes weather, politics, and pandemics.

Shares of SUM traded as high as $24.50 (intraday) in mid-February 2020 after the company posted a strong 4Q19 with the economy expected to hum along and hopes of an infrastructure bill passing to replace the Fast Act sometime before its expiration (September 30, 2020). Then coronavirus panic cratered its stock to $7.51 (intraday) in March as the market assumed that its construction end markets would shutter causing both a lack of demand and consequent pricing pressures on its products.

However, that has yet to materialize. After posting an in-line 1Q20 with a revenue beat of 10.4% that featured organic average selling price growth of at least 2% in all four of its materials and product categories, Summit produced another excellent quarter in 2Q20. The company announced non-GAAP EPS of $0.50 on revenue of $575.2 million versus $0.31 on revenue of $552.6 million in 2Q19, representing 61% and 4% improvements while beating Street estimates by $0.26 a share and $28.1 million (5%), respectively. Adj. EBITDA in 2Q20 increased 14% to $160.2 million while organic average selling prices and organic sales volumes increased for three of its four materials and product categories. Gross margins rose across the board versus the prior-year period. 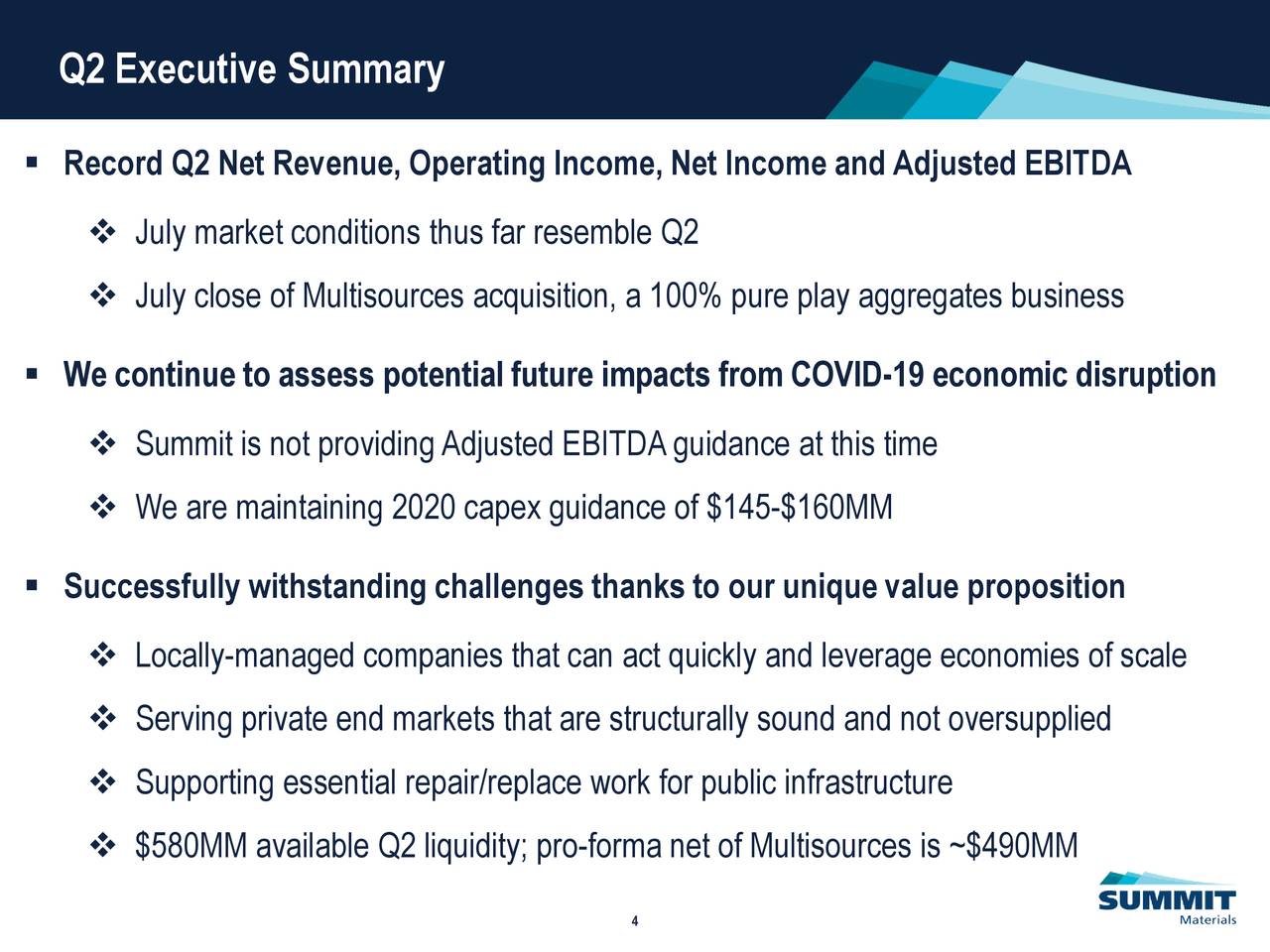 Summit was helped by good weather in Utah and Kansas and hurt by an April 2020 explosion at one of its two cement plants, which was responsible for most of the sales volume drop for that product. It was also aided by the fact that construction was considered an essential function during the COVID-19 outbreak, leaving its business activity relatively unaffected to date. 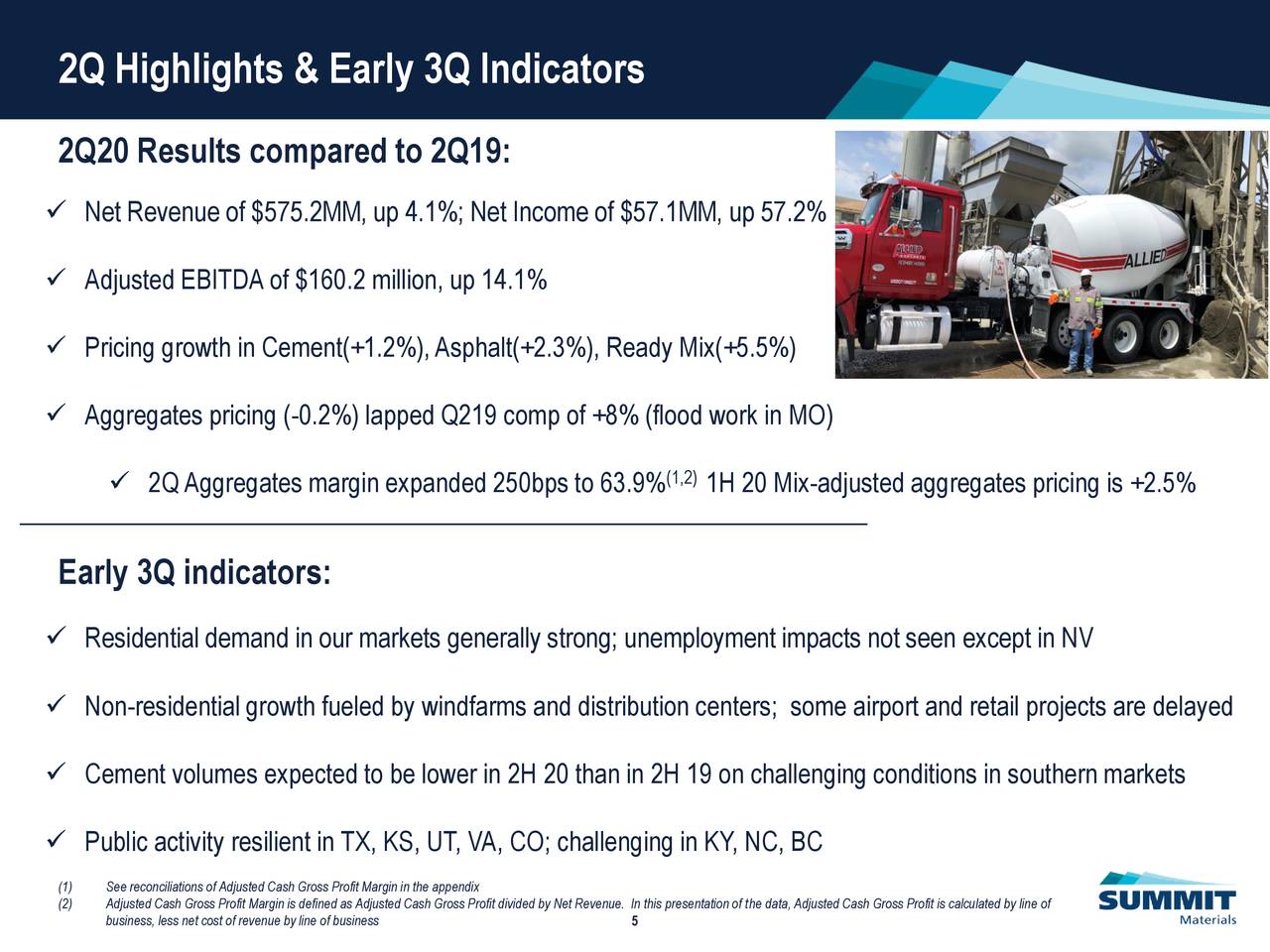 Summit elected not to provide any guidance for Adj. EBITDA going forward, only stating that capex would remain in a $145 million to $160 million range for FY20, of which greenfield projects would account for $50 million to $60 million of the spend. Predominantly all the non-greenfield spend occurred in July 2020 with the $92 million acquisition of Multisources Sand & Gravel, making Summit the leading aggregates supplier in the Houston market.

Despite all the uncertainty surrounding the U.S. economy, seasonally impacted Summit emerged from 2Q20 in the best financial shape of any 2Q in the company’s history, with its leverage ratio improving significantly to 3.5x versus 4.7x in 2019 while boasting ~$580 million of available liquidity, of which $253.4 million was cash. Available liquidity dropped to ~$490 million and leverage increased to 4.3x with the acquisition of Multisources. 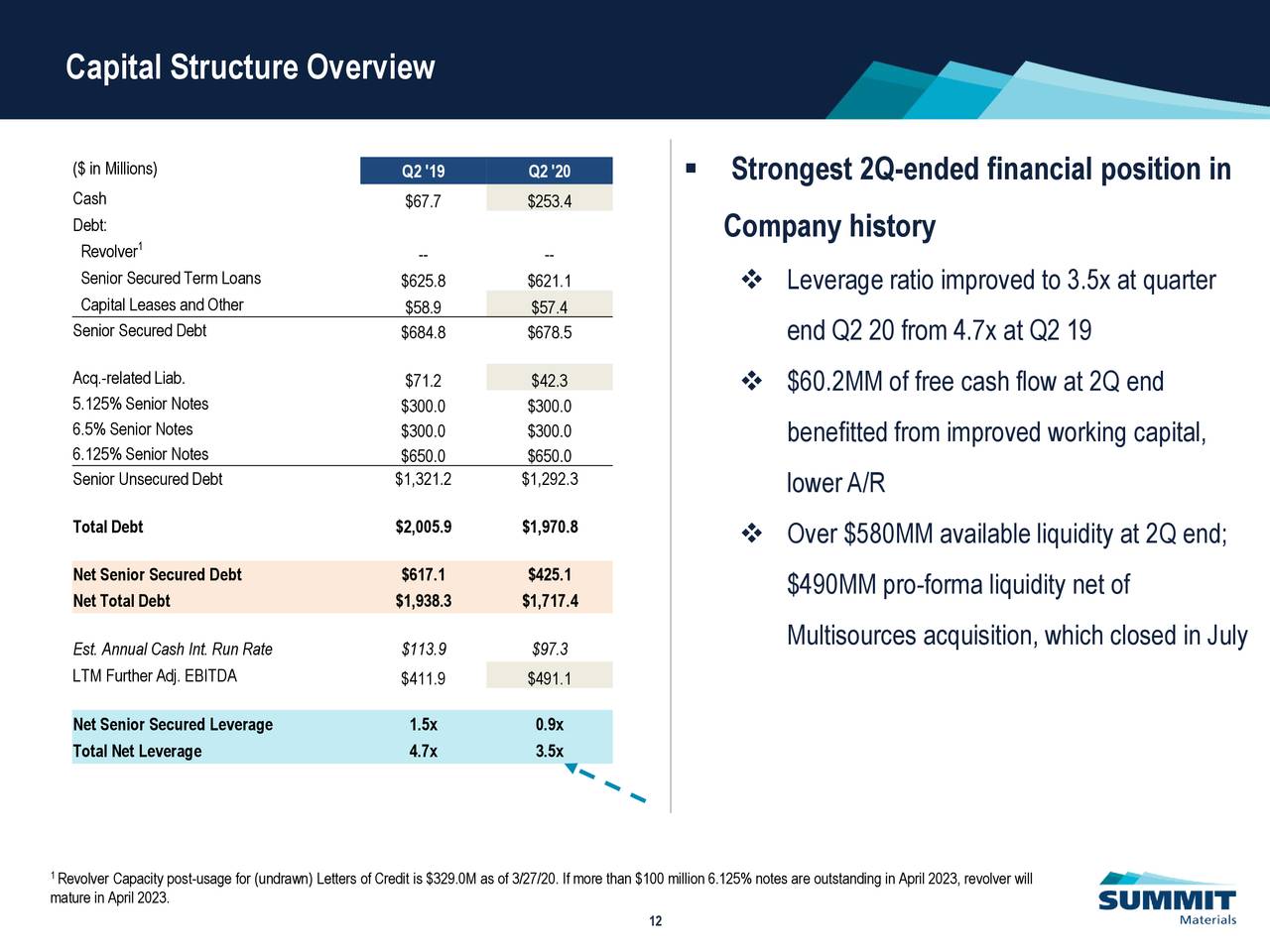 The company then completed a successful refinancing of its $650 million 6.125% Senior Notes due 2023 with $700 million 5.25% Senior Notes due 2029 in August 2020. In addition to saving Summit more than $3 million in annual interest payments, the transactions pushed out its earliest major debt due date to November 2024, when ~$621 million of senior secured term loans come due. Overall, the company holds slightly over $2 billion in debt.

Owing to its growth-by-acquisition strategy, Summit does not pay a dividend or repurchase shares.

The Street is coming around on Summit, providing four upgrades since July 2020. Overall, there are nine buys and two outperforms versus three hold and one sell rating. Their median twelve-month price target is just north of $22 a share.

Concurrent to the company’s 2Q20 earnings release, it was announced that Founder, President and CEO Thomas Hill would be stepping down from his roles effective September 1, 2020, replaced by Anne Noonan. She wasted no time putting her personal capital to work, investing $1 million into shares of SUM at $15.24 on September 4th, 2020.

Curiously, shares of SUM initially traded lower after its 2Q20 earnings release on July 21st, from over $18 to below $15. With the residential housing market likely to see a spike from the mass exodus from Northern cities currently transpiring throughout the country and public infrastructure tailwinds in two of its major markets with Kansas passing a ten-year, $10 billion transportation bill and Utah authorizing a sales tax on gasoline and diesel that should generate $170 million annually for transportation infrastructure, the immediate future doesn’t look ominous. Passage of a federal infrastructure bill seems unlikely with the election less than 50 days away, but at some point, the entire construction materials group will get a bump when a compromise is reached.

The company won’t provide any financial outlook until its 3Q20 earnings report, but the new CEO may have tipped her hand on what she anticipates, and the market has followed her lead, rallying Summit’s stock more than 20% from her purchase price. There is still plenty of time to follow the insider in our opinion especially using a simple covered call strategy which is how I have been deploying ‘dry powder‘ into the market throughout 2020.

Bret Jensen is the Founder of and authors articles for the Biotech Forum, Busted IPO Forum, and Insiders Forum

Author’s note: I present an update my best small and mid-cap stock ideas that insiders are buying only to subscribers of my exclusive marketplace, The Insiders Forum. Our model portfolio has more than doubled the return of its benchmark, the Russell 2000, since its launch.  To join our community and gain access to our market beating returns, just click on our logo below.

Disclosure: I am/we are long SUM. I wrote this article myself, and it expresses my own opinions. I am not receiving compensation for it (other than from Seeking Alpha). I have no business relationship with any company whose stock is mentioned in this article.