This article was highlighted for PRO subscribers, Seeking Alpha’s service for professional investors. Find out how you can get the best content on Seeking Alpha here.

With tech stocks at teetering heights again, the IPO window is wide open. Many tech unicorns who have been waiting for the right moment to go public are seizing their opportunity now: not only to take advantage of rich tech valuations, but also to raise much-needed capital to secure growth in a very uncertain pandemic environment.

Datto (MSP), an IT infrastructure software company, is one of the latest new entrants to the crowded IPO field. A rare tech company to come out of the state of Connecticut, Datto was founded in 2007 as a company that primarily focused on data backup services. One unique thing about Datto is that contrary to many of its Silicon Valley peers, who strive to raise capital early on in their formation, Datto managed to bootstrap its way to growth and shunned venture financing. Ten years after its founding, in 2017, Datto was purchased by tech-focused PE firm Vista Equity Partners for $1.5 billion, and now three years later, Vista is seeking a traditional IPO exit. If multiples of peer software companies are any indication, Vista will have made a tidy return within its relatively short three-year hold. 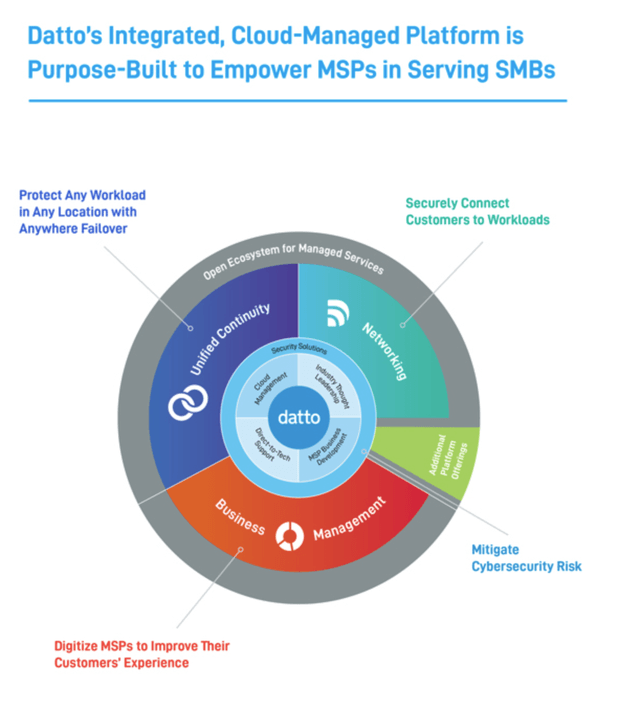 Datto’s IPO, to me, is a mixed bag of risks and opportunities. On the one hand, the company sits at the intersection of many hot computing trends (big data, cloud, outsourced IT) – yet at the same time, the company’s relatively low mid-teens growth plus its concentration on small and mid-sized (BATS:SMB) clients may be negative factors that draw sentiment away from the stock.

Still, if Datto debuts at an attractive valuation, I think the company’s strong and comprehensive technology stack plus its financial profile – stable growth, but balanced alongside profitability – could make for a worthwhile long-term investment.

The IPO date and many details are still TBD, but here’s everything we know so far.

Datto believes that MSPs “represent the future of IT management for SMBs.” From the company’s S-1 filing:

As dedicated technology experts, MSPs are equipped with the IT resources and expertise SMBs lack, providing a single source to meet all of an SMB’s IT needs. MSPs are trusted to select, procure, implement and manage software and technology stacks for their SMB customers. After implementation, MSPs provide ongoing value to SMBs through strategic guidance, technical support, monitoring and maintenance of their full IT environments.”

It falls on MSPs to keep up with the latest computing trends and deliver the best infrastructure for their clients – and this is where Datto comes in. Datto sells primarily to MSPs located across the U.S., and its customer base includes over 17,000 such firms – which, in turn, service hundreds of thousands of small businesses. Focusing on MSPs has proven to be a relatively effective go-to-market strategy for Datto. Instead of trying to market its products to the millions of small businesses in the U.S. (many of which are not well-versed on exactly what IT infrastructure they need), Datto can focus its selling efforts on fewer prospects who can then spread Datto’s products to their own customers. Datto notes that its typical MSP supports several hundred customers, which Datto notes causes “the reach of our sales force [to be] greatly amplified.” More than 1,000 of Datto’s MSPs generate more than $100,000 in ARR>

Datto notes that there are 125k MSPs globally, and in 2019, MSPs had a staggering $137 billion annual market for their IT services to SMBs. This is part of a still-larger market totaling up to $1.2 trillion for SMB IT needs worldwide. Consistent with Datto’s belief that “MSPs represent the future” of SMB IT, a research report from Frost & Sullivan (commissioned by Datto for the purposes of the IPO filing, however) noted that MSPs’ TAM is expected to grow at a 16.4% CAGR through 2023, versus 4.6% CAGR for SMB IT overall.

A comprehensive IT suite for MSPs

Datto’s core value proposition is that it provides a comprehensive, plug-and-play IT management system for the managed service providers in its network.

Here’s a look at how the relationship between Datto, MSPs, and the ultimate customer work. The MSP pays Datto recurring SaaS revenues for access to its software, while the end-customers pay MSPs for outsourcing their IT needs.

Datto’s flagship product is called Unified Continuity, the product that the company initially launched with. Powered by the Datto Cloud, customers using this service get all of their data backed up remotely. The capabilities are broad – per Datto’s own verbiage in the S-1, Datto “[enables[ the full image backup, virtualization, cloud replication and restoration of entire physical or virtual servers and PCs, whether on-premise at an SMB, or remotely in a data center or in the cloud.” The fact that Data is cloud-agnostic is important, because these days many businesses have data residing not only in their own internal systems, but offloaded in third-party SaaS tools. For example, a salesperson might have all of their contacts and engagement records logged in Salesforce’s (CRM) Sales Cloud. Regardless of source, Datto helps its customers (through MSPs) protect against failure.

Datto notes that over 82% of businesses have experienced some sort of data loss issue, so having continuity and backup services are critical (and it’s a core offering that MSPs provide to their clients).

For the MSPs themselves, Datto also offers a Business Management product that gives MSPs a “multi-tenant” view into their SMB clients, allowing them to administer and provision IT tools from a centralized management panel.

Datto’s most significant competitors include Veeam, purchased by Vista rival Insight Venture Partners earlier this year for $5 billion, and Carbonite, acquired last year for $1.42 billion. While these and several other companies provide similar technology to Datto (backup services, after all, are common products even to everyday consumers), it’s Datto’s go-to-market model focusing on MSPs that differentiates its approach from its competition.

Let’s now dive into Datto’s financials. Take a look at the history below: 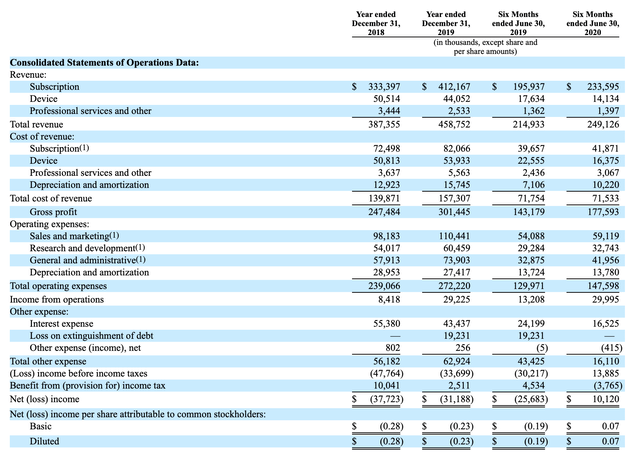 In 2019, Datto generated $458.8 million revenue. Important to note is that the majority of Datto’s revenue stream comes from its SaaS subscription products (90% of its FY19 revenue stream), but the company does also sell some devices under its Networking division (Wifi access points, routers, switches, etc.). On a GAAP basis, Datto sells devices below cost – but high ~80% GAAP subscription margins help to soften the blow.

In the first six months of 2020, Datto grew revenues at 16% y/y to $249.1 million. We note that this is a slower growth rate than most other IPO candidates – though at a ~$500 million annualized revenue run rate, Datto is also larger than the typical tech IPO. Subscription revenues did grow at a slightly faster 19% y/y pace, while device revenues declined.

This more favorable revenue mix in 2020 year-to-date did help Datto to generate slightly more favorable gross margins – 71.3% on a consolidated basis, up 470bps from 66.6% in the year-ago quarter.

Datto’s strategy for growth is three-pronged: first, to land new MSPs; second, the expand business within those existing MSPs (a “land and expand” business model, similar to most other SaaS companies), and third, to expand internationally. Datto opened its first international markets in Europe and Australia in 2013, and the company has since also expanded into Asia – currently, international contributes 27% to the company’s overall revenue.

Another factor that sets Datto apart: in the first six months of 2020, Datto was actually profitable on a GAAP basis. 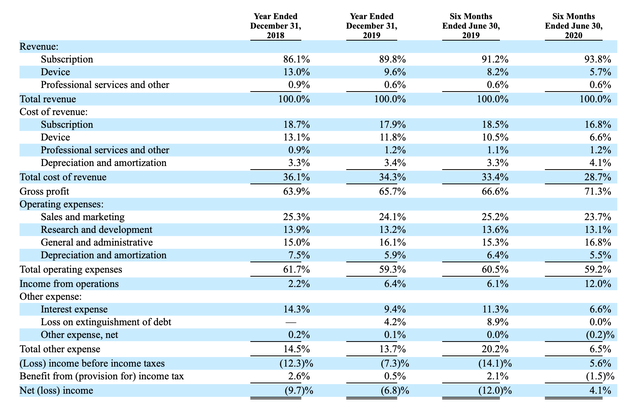 Thanks to Datto’s richer gross margin profile (due to a stronger subscription mix) as well as a reduction in sales and marketing expenses as a percentage of revenue, Datto was able to generate a 12.0% GAAP operating margin (+590bps y/y) and a 4.1% GAAP net margin.

Datto is also cash-flow positive, having generated $24.0 million of operating cash flows in the first six months of 2020. This is good news because its balance sheet is running thin, which may be the motivation behind this IPO: as of June, Datto had only $59.6 million of cash, alongside $582.2 million of debt – carrying the footprint of a typical PE-backed company.

There’s certainly a lot of opportunity in the Datto IPO. Despite slower-than-usual growth for a tech IPO, Datto stands out by being profitable on a GAAP basis. The company’s unique focus on managed service providers and the leverage that business model allows for (covering millions of SMBs by covering only thousands of MSPs) is another distinct advantage. More to come as the IPO draws closer.

For a live pulse of how tech stock valuations are moving, as well as exclusive in-depth ideas and direct access to Gary Alexander, consider subscribing to the Daily Tech Download. For as low as $17/month, you’ll get valuation comps updated daily and access to top focus list calls. This newly launched service is offering 30% off for the first 100 subscribers.