Tariffs and sanctions haven’t yet hampered Chinese corporate bond markets too much. But escalating tensions between the US and China could reveal some cracks. We shine a light on which sectors and credits are most vulnerable.

Then, in late August, the US added 24 Chinese companies to its list of those banned from buying American goods, citing the companies’ alleged links to Chinese military projects. The US Department of Commerce banned mobile-app downloads of Chinese social media platforms TikTok and WeChat, to which China responded by announcing plans to sanction foreign entities that it considered to be harmful to its national interests.

Perhaps surprisingly, the US dam on China trade has not yet resulted in broad economic decoupling between the two countries. And, with one or two exceptions, credit spreads on Chinese corporate bonds haven’t been materially affected.

Because US-China tensions may escalate in the run-up to the US elections on November 3, we think caution is warranted.

Here’s where we see the risks to Chinese companies.

China Relies on US Technology

We regard three sectors of the Chinese credit market as key targets for US sanctions: technology companies, banks and state-owned enterprises (SOEs).

China relies on the US for most of its tech imports (Display). 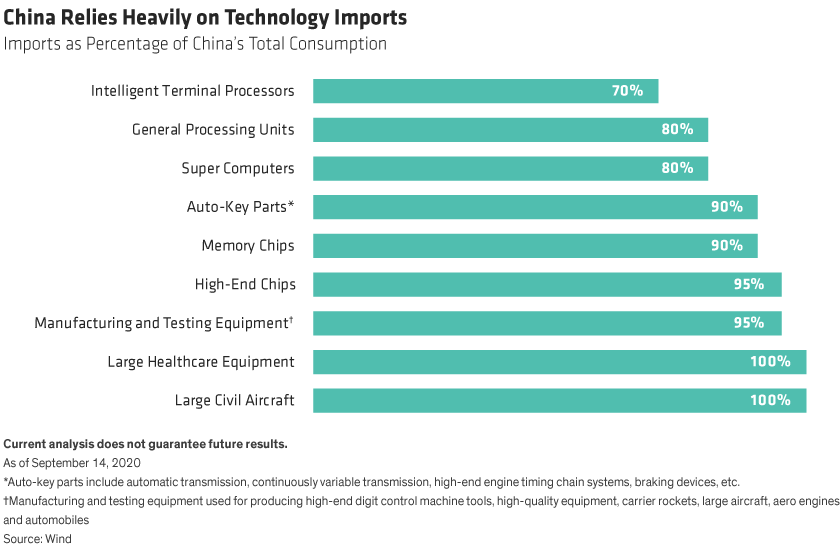 The US dominates the tech sector, especially in semiconductors. Its interest in holding a competitive edge may be a factor behind the export controls and economic and trade sanctions that it has threatened or imposed on Chinese tech companies.

The US government also cites concern about the data security of millions of users of Chinese social media platforms as another factor in its curbs on TikTok and WeChat. The measures include pressure for TikTok to partner with US companies in a new, US-controlled entity.

The US government also seeks greater scrutiny of Chinese companies listed on US exchanges. To that end, it has demanded access to the audit working papers of internet companies listed on NASDAQ. China has resisted such moves, citing its own data security concerns.

Given what appears to be at stake for both sides, we expect Chinese technology companies to remain a key target of US sanctions for the foreseeable future. The extent to which individual companies will be affected will need to be assessed on a case-by-case basis.

This is important, as some companies may be able to withstand the pressure better than others. In the case of Chinese internet companies on NASDAQ, for example, a worst-case scenario might be that they are forced to delist from the exchange as a way of avoiding unwanted scrutiny from US authorities. This would result in credit investors having less visibility into their capital structures.

But many would have a Plan B option of listing on stock exchanges in China or Hong Kong. This could help mitigate concerns about visibility into capital structures, and credit investors might take additional comfort from the fact that Chinese corporate bonds tend to be well supported by domestic Chinese investors.

Banks and SOEs Are Harder Targets

Investors should also make case-by-case assessments when looking at the potential vulnerabilities of Chinese banks and SOEs, in our view. Generally, however, we regard these sectors as less sensitive to US sanctions than technology.

China’s banks on the mainland and in Hong Kong have become well integrated into the global trading system – a measure by which they far exceed banks from other countries sanctioned by the US (Display). In addition, Hong Kong banks have large US dollar exposures. 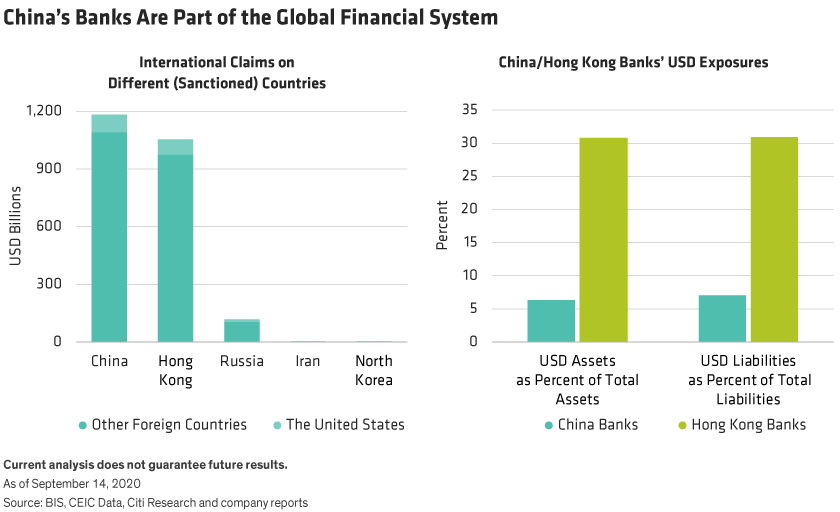 This makes them a harder target than import-dependent technology companies. While we don’t rule out the possibility of the US trying to cut China from the international financial system, it seems unlikely, given the disruption it would cause to the US’s dominance of the system.

The US regards China’s SOEs with suspicion because of apparent links some have to the Chinese military. However, we think sanctions on SOEs are likely to have limited impact, for a variety of reasons.

First, most of SOEs’ overseas business consists of “Belt and Road” projects outside the US. Second, SOEs import relatively little technology and other materials from the US. And third, they are partly insulated from financial stress by being owned and supported by the Chinese government. In fact, we believe their strategic importance to the Chinese government will be the primary driver of their credit profile.

While US-China relations could deteriorate further in the short term and remain difficult for the foreseeable future, we think investors should take a measured view of how such an environment is likely to affect the Chinese corporate bond market.

Owners of Chinese corporate bonds may wish to bear these relative risks in mind when monitoring their exposures and to evaluate on a case-by-case basis the risks and opportunities presented by individual securities.

The views expressed herein do not constitute research, investment advice or trade recommendations and do not necessarily represent the views of all AB portfolio-management teams. Views are subject to change over time.