As a rough September in the stock market has come to an end, marking the first negative month of returns since March, I began a postmortem analysis on the best and worst performers within my All-Equities SRG portfolio. So far, I have written about Five Below (FIVE) among the winners and about Dropbox (DBX) on the loser side.

Today, I turn my attention to Dollar General (DG). Currently, the stock with the second largest allocation in my portfolio, DG ended September up nearly +4%. This is impressive, in the face of a broad market (SPY) that dipped almost as much in the month. Let’s take a closer look at some interesting share price metrics, and see how they seem to support my bull thesis on the stock. 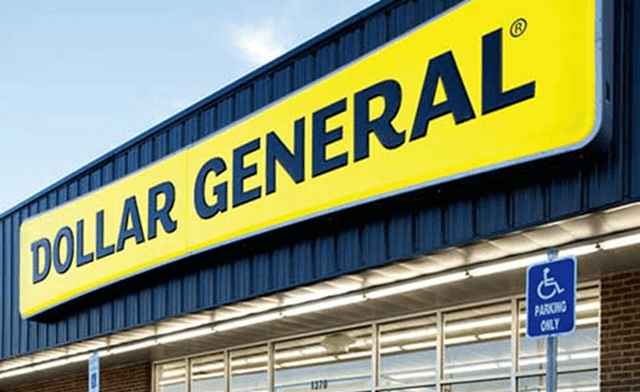 A few months ago, I wrote an article explaining why Adobe (ADBE) was the poster child of storm-resistant growth (hence the acronym “SRG”). But to be fair to Dollar General, the retailer’s stock probably deserves the title just as much.

The chart below shows price action for DG and the S&P 500 since the start of 2020. It is remarkable how the former has managed to climb almost uninterruptedly, even through a very turbulent February-March period (maximum peak-to-trough decline of only 20% and return to all-time high in only 45 days vs. the S&P 500’s six months) and the September pullback.

The following metrics further illustrate how compelling it has been to own DG in a portfolio over the past several months at least:

Great numbers through thick and thin

In order to include a stock in my All-Equities SRG portfolio, a company needs to pass all or most of the following criteria:

In my view, Dollar General passes most criteria above with flying colors, even though it does not run a recurring revenue business per se – although one could argue that consumer loyalty serves a similar purpose. The result has been outstanding financial performance through the best and worst of times.

The retailer performed well during periods of low economic activity like the Great Recession, managing to grow revenues, gross profits and store footprint at a solid pace even in fiscal 2008. Then, it did it again during a decade-long period when, theoretically, consumers had more disposable income to spend elsewhere.

Dollar General’s recent results only serve to reinforce the robustness of its business. From early 2017 (when I started to follow this name) through the end of 2019, comps averaged a respectable 3.3%. Meanwhile, the company continued to expand footprint aggressively, leading to an average revenue increase of 8.7% during the period and sales growth that never dropped below 6.5% in any given quarter.

When this year’s pandemic started, it was Dollar General’s turn to shine even brighter, as the chart below depicts. The retailer, which traditionally has performed better than peer Walmart (WMT), extended its market lead even further. As the COVID-19 crisis shows few signs of going away soon and the recession might linger for a while longer, I expect Dollar General to continue to perform well in the foreseeable future. 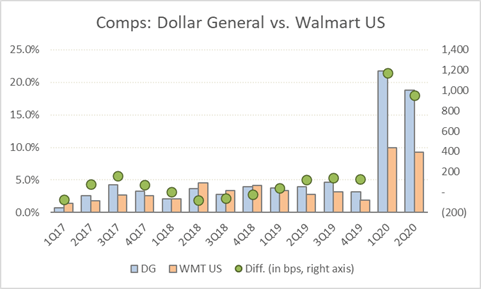 Perhaps the biggest problem with investing in DG at today’s levels are valuations. Current-year P/E ratio of 21.8x is no higher than it was this time last year, but the metric could be skewed by 2020 bottom-line results that are likely to be unusually strong. On a next-year basis, the earnings multiple of 22.8x is a solid six turns higher than it was in October 2019. See chart below.

Still, I believe that the price to be paid on the stock of a high-quality company that seems to perform well in both favorable and unfavorable macroeconomic environments (and even better during catastrophic events, like a pandemic) should be on the richer side. For this reason, I maintain my bullishness intact, and my All-Equities SRG portfolio more heavily allocated to this stock.

Beating the market by a mile

Members of my Storm-Resistant Growth community will continue to get updates on DG (allocation updates, insights, etc.) and the performance of my market-beating “All-Equities SRG” portfolio on a regular basis.

To dig deeper into how I have built a risk-diversified strategy designed and back-tested to generate market-like returns with lower risk, join my Storm-Resistant Growth group. Take advantage of the 14-day free trial, read all the content written to date and get immediate access to the community.

Disclosure: I am/we are long DG, ADBE, DBX, FIVE. I wrote this article myself, and it expresses my own opinions. I am not receiving compensation for it (other than from Seeking Alpha). I have no business relationship with any company whose stock is mentioned in this article.