U.S. Dollar Is Battling Back

U.S. Dollar Is Battling Back

Surging inflows have helped the Invesco DB US Dollar Index Bullish Fund (NYSEARCA: UUP) in recent trading sessions and the fund has gained as much as 3.2% since the beginning of September 2020. Fundamental messages remain somewhat mixed when we look at region-specific data reports, so investors must analyze macroeconomic data in the United States in order to understand the true strength of these rallies. Ultimately, if the Invesco DB US Dollar Index Bullish Fund can overcome resistance near 25.90, we believe that the fundamental framework supports the bullish case and markets could see much higher valuations into 2021. 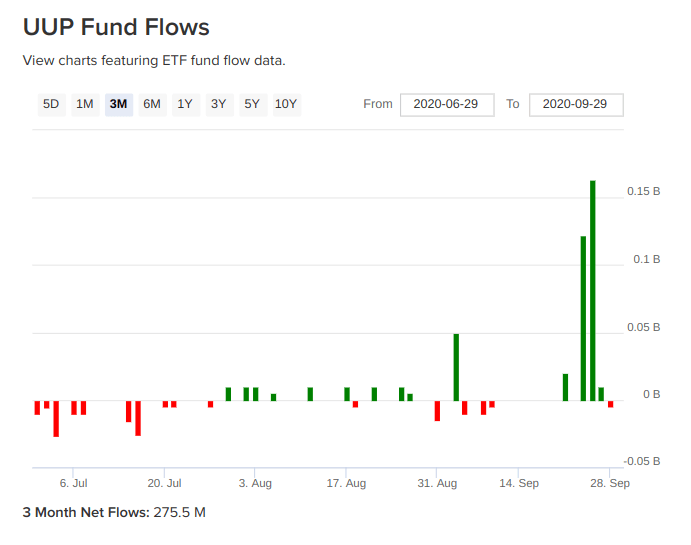 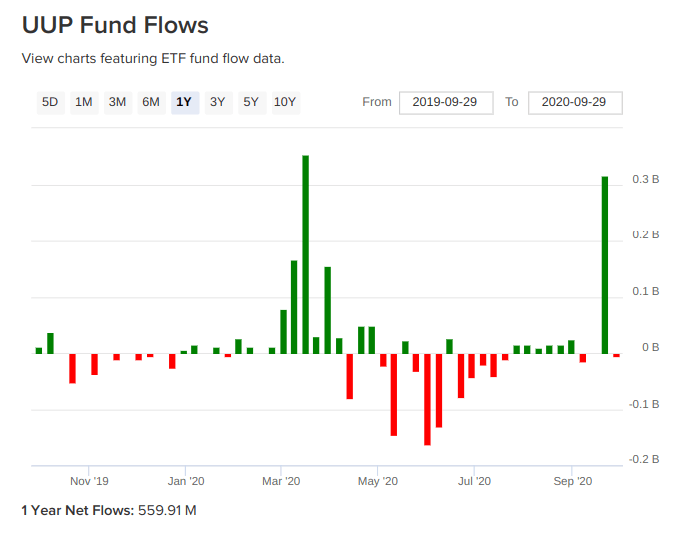 If we pull out and view the Invesco DB US Dollar Index Bullish Fund on longer-term timeframes, we can see that the fund is now reaching the types of inflow levels that were seen during the initial surge in coronavirus cases in the U.S. During this period, dollar-based assets were given priority as a key market safe haven and this helped generate a significant amount of buying activity in the Invesco DB US Dollar Index Bullish Fund. Given this latest inflow data that is associated with the fund, it now appears as though the market is granting safe haven status to UUP once again and this is another factor that could send valuations higher before the end of 2020.

Unfortunately, some of this trading activity has failed to align itself with the underlying fundamentals as the macroeconomic picture remains sluggish whilst hopes for another U.S. stimulus package begin to fade. In the U.S., inflation rates are rising but these changes have been sluggish in the wake of the coronavirus pandemic lockdowns. The rate of inflation rose to 1.3% (on an annualized basis) during the month of August, which follows a gain of 1% during the July reporting period. Of course, this was higher than analyst forecasts calling for a gain of 1.2% but the figures in the August 2020 BLS report are still far below the peak that was set in January 2020. 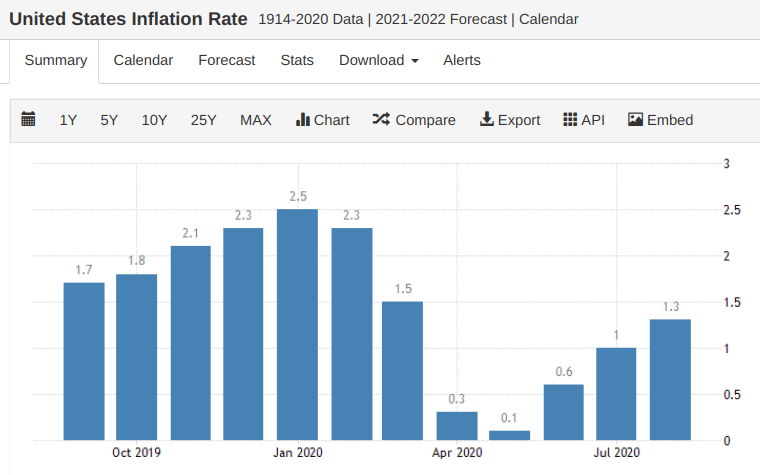 Areas of obvious strength could be found in used automobile costs (which gained by a massive 4%) but the average prices for new automobiles were also higher (at 0.7%). Energy costs dropped by 9% (after falling by an incredible 11.2% during the previous month), while food inflation rose by 4.1% and costs for housing rose by 2.3%.

Medical care costs rose by 5.3%, while apparel prices dropped by a substantial 5.9% and transportation costs fell by 4%. From the monthly perspective, total consumer prices in the U.S. rose by 0.4% (which beat analyst estimates calling for inflation levels of 0.3%). If we exclude energy and food prices, we arrive at a core inflation level of 1.7% for the period. Interestingly, these trends were also visible in the U.S. Consumer Price Index (NYSEARCA:CPI), which rose to 259.7 during the month of August 2020 (following a July 2020 reading of 258.7). 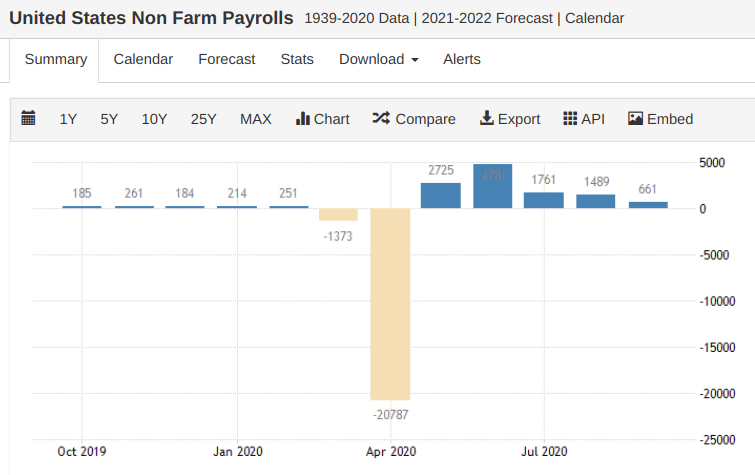 Of course, the “elephant in the room” is still the country’s nonfarm payroll figure because this is a primary metric that is used by the U.S. Federal Reserve when defining monetary policy and proper interest rate levels. We believe that the Invesco DB US Dollar Index Bullish Fund would have the potential to rally dramatically in the event that the Fed were to make the decision to raise interest rates ahead of its previously stated timelines.

During the month of September, 661,000 jobs were added in the United States but this was a sharp decline from the nearly 1.4 million jobs that were added during the month of August and it was also below the consensus estimates calling for an increase of 850,000. Overall, this means that September’s total nonfarm employment came in at roughly 7% below the February highs but significant improvements were seen in the hospitality sector (with a gain of 318,000 jobs) and in the retail sector (with a gain of 142,000 jobs). Additional areas of strength could be found in healthcare (with 108,000 new jobs created) and professional services (with a monthly gain of 89,000 new jobs).

Overall, there might be reasons to see pessimism in these numbers because roughly 22 million jobs were lost in the United States during the March-April period and just 11.3 million jobs have been recovered in the periods that followed. However, we believe that even these “bad news” scenarios might turn out to be beneficial for the Invesco DB US Dollar Index Bullish Fund if new trends in safe haven buying begin to develop. For these reasons, we believe that the market could see much higher valuations into 2021 if the Invesco DB US Dollar Index Bullish Fund can overcome resistance near 25.90 and continue in its trends showing a strong increase in net flows during tumultuous trading periods.

Thank you for reading.

Now, it’s time to make your voice heard. Reader interaction is the most important part of the investment learning process. Comments are highly encouraged! We look forward to reading your viewpoints.