This article was highlighted for PRO subscribers, Seeking Alpha’s service for professional investors. Find out how you can get the best content on Seeking Alpha here.

Last Friday, we heard reports that private equity firms are bidding on one of the North America’s last independent railroads, the Kansas City Southern (KSU). Over the years, the rails have largely merged or gotten acquired, such as when Berkshire Hathaway (BRK.B) bought BNSF a decade ago. Now, it appears, KCS will be the next to go – shares jumped more than 10% instantaneously on Friday once the story hit, and the gains have held up this week:

If the rail is acquired, it will go off near or at its all-time high price, despite the economic mess we’re currently in: 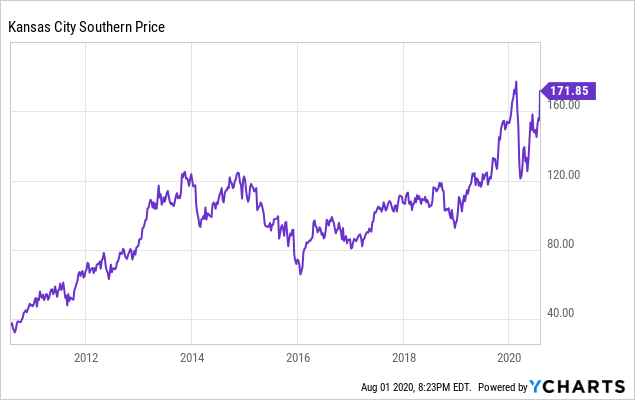 I don’t have a position in KSU stock, nor in any of the other rails, so why is this of interest? It’s because this is fantastic news for one of my top holdings.

Kansas City Southern is the rail network that NAFTA built – that is to say – it’s the railroad designed to benefit from the further growth of U.S-Mexican free trade. Just look at the company’s route network: 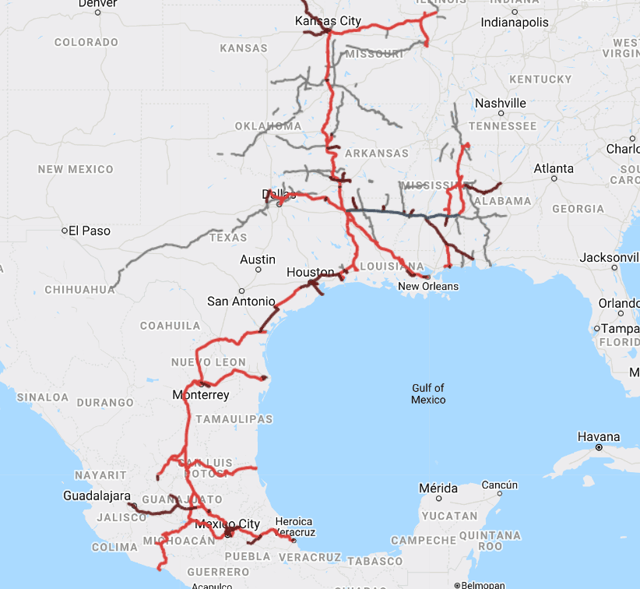 KCS’s line runs right through the key Laredo, TX/Mexico border crossing while linking Monterrey and Houston. The line branches off at Monterrey to connect Reynosa, Brownsville, and other border city manufacturing centers.

Once in Mexico, it proceeds south through more huge factory areas including San Luis Potosi and Queretaro before arriving at Mexico City. For traffic heading north out of Mexico, Houston isn’t the only option – the network also connects to Dallas, New Orleans, Kansas City, and other points in the South Central U.S.

The Wall Street Journal’s coverage described a KCS buyout as a “big bet on U.S-Mexico trade” and elaborated, saying:

“Kansas City Southern is the smallest of the five major freight railroads in the U.S. The company plays a key role in U.S.-Mexico trade with a network across both countries. Its trains bring autos and other industrial products up from factories south of the border into Texas and the Midwest and haul American farm goods back to Mexico.”

If a huge private equity consortium – with Blackstone (BX) leading the way – is willing to bet $21 billion on a U.S.-Mexican railway during the middle of a recession, what’s that say? It’s a huge vote of confidence for the future of Mexican manufacturing.

KCS owns its U.S. track infrastructure and in Mexico operates via concession on track that runs down to Mexico City and to the east and west coasts. In our view its Mexican routes are well placed to exploit USMCA trade, Mexican automobile production, refined product shipments into Mexico, and U.S. intermodal volume on the strategically placed east-west Meridian Speedway.

The railroad gets about half its revenues from its Mexican operations. And it hits many of the key points, such as the auto industry and USMCA trade that is at the core of my bull thesis for Monterrey Mexico’s airport as well.

It’s worth noting that freight railroads are inherently dependent – to a huge degree – on “old economy” activity. You don’t need rails for technology, biotech, or other futuristic industries to a substantial degree. No, you need it for moving around cars, airplane parts, raw resources, and so on.

If you want to ship that stuff through Mexico, where does it go? It all goes through Monterrey – Mexico’s big northern hub. From Monterrey, you have direct highway, rail, and air transport links to various points in Texas and farther north.

It’s no coincidence that Kansas City Southern’s railroad branches off at Monterrey – the whole area surrounding Monterrey is the center of Mexico’s manufacturing heart. Private equity realizes that and wants to buy in now, while the price is still reasonable. Once investors catch wind of just how much manufacturing is setting up in Mexico to get away from China, prices of Mexican assets will surge.

With The Railroad Being Acquired, How About The Airport?

Which brings us to Centro Norte (OMAB), the operator of the Monterrey airport. I’ve made the case for the airport operator repeatedly since Covid hit. So I won’t repeat myself at length today. Just know that Blackstone just gave us a huge buy signal.

Private equity wants to own Northern Mexico’s manufacturing potential. They can’t acquire OMAB outright – my reading of the concession agreement is that it forbids foreigners from buying the firm out – but the stock price could sure squeeze far higher as people figure out what’s happening here.

There’s an interesting point here on the concessions as well. KCS operates a concession for its Mexican rail business rather than owning it outright. Interestingly, this concession expires in 2047. Here’s the railroad’s comment on this from the 10-K:

KCSM holds a Concession from the Mexican government until June 2047 (exclusively through 2027, subject to certain trackage and haulage rights granted to other concessionaires), which is renewable under certain conditions for additional periods of up to 50 years. […] KCSM is obligated to maintain the right of way, track structure, buildings and related maintenance facilities to the operational standards specified in the Concession agreement and to return the assets in that condition at the end of the Concession period.

During the remainder of the Concession period, KCSM is required to pay the Mexican government an annual concession duty equal to 1.25% of gross revenues. The ARTF may request information to verify KCSM´s compliance with the Concession and any applicable regulatory framework.

Long-time followers of the Mexican airports may recall that all those concessions expire in 2048 – the structure is quite similar to what they did with this rail asset the previous year.

Skeptics often ask: “But Ian, what happens in 2048 when the airport concessions expire?” For one, they are potentially renewable for another 50 years, just as is the case with the railroad above. For another, 2048 is still 28 years in the future – often when doing a discounted funds model, you go into perpetuity around 10 years out; cash flows from 28 years are way out there in the future.

This private equity buyout of KCS backs up my thinking. Blackstone and its partners apparently aren’t too preoccupied about what may happen come 2047. If their thinking is right, they’ll make plenty of money off the asset long before 2047 rolls around.

With the recent dip in the aviation sector again, Centro Norte – with its crown jewel Monterrey airport – is back to less than 8x EV/EBITDA. This is a steal for the firm:

Even in past scares, such as the Trump election jitters in late 2016, the stock never went below 8x EV/EBITDA (and it’s closer to 6x EBITDA now if you use pre-Covid numbers). Historically, Centro Norte has grown passenger traffic, revenues, profits, EBITDA, and the dividend at compounded double-digit rates over the past decade. While the valuation the market is willing to pay for the firm varies significantly, the current price is a distinct outlier.

Since the firm has minimal debt (just one turn of EBITDA), it can ride out the current mess. When things come surging back, infrastructure assets that rely on Mexican manufacturing should be some of the most attractive assets. Blackstone just said as much with its efforts to acquire the railroad that serves Monterrey. Now’s the time to grab the complementary airport.

This is an Ian’s Insider Corner report published August 2nd for our service’s subscribers. If you enjoyed this, consider our service to enjoy access to similar initiation reports for all the new stocks that we buy. Membership also includes an active chat room, weekly updates, and my responses to your questions.

Disclosure: I am/we are long OMAB,BRK.B. I wrote this article myself, and it expresses my own opinions. I am not receiving compensation for it (other than from Seeking Alpha). I have no business relationship with any company whose stock is mentioned in this article.

Zuora: If You’re Looking For…

PayPal: Not Slowing Down, Picking…

Rent-A-Center Is A Surprising Winner…