Southwest Airlines: The Most Defensive Airline

Southwest Airlines: The Most Defensive Airline

Despite plummeting revenues and damaged traveler confidence in the airline industry, Southwest (LUV) is positioned to thrive during this pandemic, as reflected by the company’s strong balance sheet and cost advantages. The double whammy from the coronavirus and 737 MAX grounding has also caused share prices to fall 50% from its all-time highs, a great opportunity for long-term investors to accumulate shares of the most defensive airline today.

On November 2019, an invisible enemy took form and decided to throw the biggest pandemic party since the Spanish Flu in 1918, causing the World Health Organization to declare COVID-19 as a world health crisis on 11 March 2020.

Global panic ensued, sending financial markets across the globe plunging a third in value. But this loss was not anywhere close to what the airline industry experienced. From the market highs of February to the lows of March, the general market, or the S&P 500 (SPY), sustained a 35% decline. On the other hand, the US Global Jets ETF (JETS) lost 65% of its value during the same period. While the S&P 500 is flat year-to-date, JETS is still down 49%. 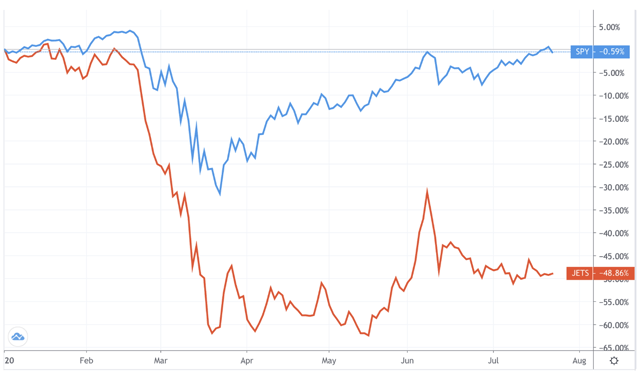 High fixed costs, high debt, and high uncertainty are causing investors to run away from airline stocks — even the Oracle of Omaha, Warren Buffett, dumped all his airline shares. But with great risks come great rewards, and it’s a matter of choosing the right airline stock to buy. For me, it’s Southwest Airlines (LUV). Before I explain why, let’s take a look at how the airline industry is doing so far.

In June 2020, the International Air Transport Association, or IATA, published its semi-annual report on the performance and outlook of the airline industry. The outlook looks extremely grim. As shown below, IATA forecasted a whopping 55% drop in global RPK (Revenue Passenger Kilometers), an industry metric that tracks air travel demand, reflecting weak consumer confidence and decreased consumer spending. In North America, ASK (Available Seat Kilometers), a metric for air travel capacity, is expected to decrease by 35% year over year in 2020, reflecting airlines’ struggle to get passengers on-board their airplanes. When travel demand goes down, airlines are forced to cut capacity, but such cuts are not enough to maintain positive cash flow. In North America, the airline industry is expected to post a loss of $23.1 billion in 2020, as opposed to a $17.4 billion profit in 2019.

Despite the grim outlook, IATA expects a strong rebound in 2021, projecting an increase of 55% in RPK from 3,929 billion in 2020, to 6,099 billion in 2021. Although such a rebound is encouraging, 2021 RPK is still expected to be substantially below the 2019 RPK of 8,680 billion. IATA is certainly not expecting a V-shaped recovery. In fact, a U-shaped or L-shaped recovery seems to be more plausible.

The Transportation Security Administration, or TSA, made a piece of valuable data available for the general public and to us, investors. TSA has published daily total traveler throughput in the United States since March 1st, for both 2020 and 2019. Below, I grouped the data to reflect weekly throughput to eliminate weekend-weekday fluctuation. I also included 2020 weekly throughput as a percentage of 2019 weekly throughput (black line), to better visualize where the airline industry is in the recovery phase. 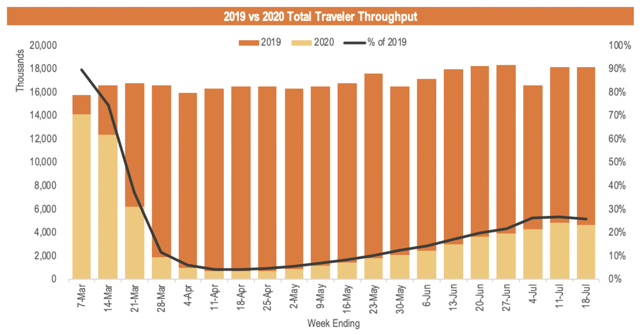 Judging by the appearance of the graph, we can see an almost-perfect L-shape, reflecting the slow and painful recovery that airplanes have to endure before they reach 2019 levels. In the short-term, an L-shaped recovery is most likely. A U-shaped recovery is only possible when a vaccine is developed and readily available to the public. The timing of vaccine deployment is, however, still unknown. For now, we can only depend on an L-shaped recovery.

Legacy carriers like Delta Airlines (DAL), American Airlines (AAL), and United Airlines (UAL) seem to be in a very tough spot given the size of their operations and the magnitude of fixed costs they have to incur. With depressed levels of throughput that we’re seeing today, these carriers need high levels of funding to cover their costs — in the form of stock, debt, or grants. Ultra-low cost carriers (ULCCs for short) like Spirit Airlines (SAVE) and Allegiant Air (ALGT), on the other hand, are better off because of higher operating margins and lower debt levels (more on these later). But smack in the middle is legacy/low-cost carrier Southwest Airlines. With a large operational footprint (thus high fixed cost), would Southwest be able to withstand the onslaught of the pandemic? If yes, how fast can it recover? Let’s find out. 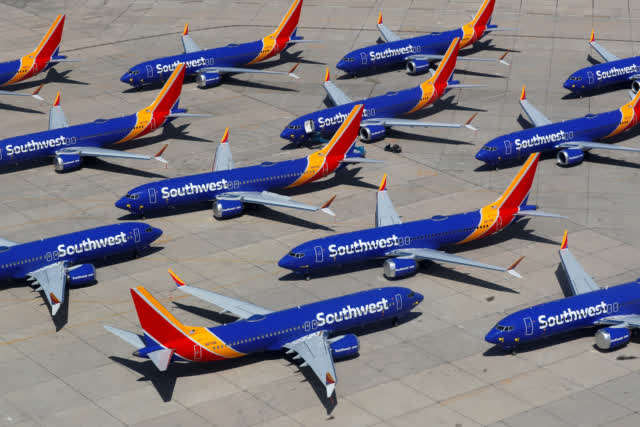 Just like its peers, Southwest will be burning lots of cash over the next couple of years. Finding how much cash the company is expected to burn before breaking even will be useful from an investing standpoint. Unfortunately, management does not disclose what the company’s fixed and variable costs are. However, during the 2020 Q1 earnings call, management gave us a hint of its cost structure:

For March alone, we were able to save approximately $100 million in non-fuel cost based on self-help measures despite roughly 75% of our cost structure being fixed due to the sudden fall off in demand, coupled with closing capacity reduction. We saved another roughly $150 million in first quarter from less gallons consumed and the falling fuel prices, with roughly half of those savings coming from fewer gallons.

In Q2, Southwest’s total operating expenses, excluding special items such as funds from the PSP (Payroll Support Program), was $3.16 billion — a 36% decrease year-over-year. That is the actual cash burn from operations. Since $2.88 billion of it is fixed costs, variable costs should be around $279 million. 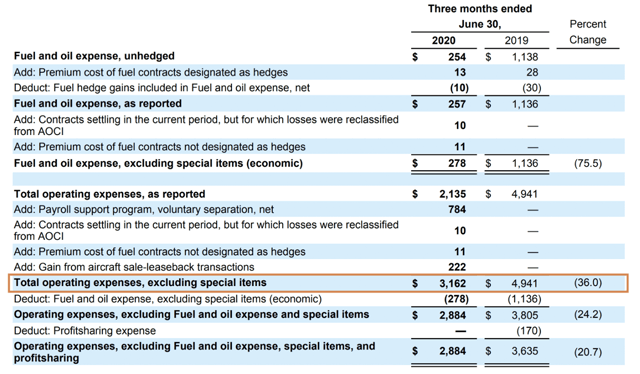 Variable expenses will depend highly on Southwest’s capacity or ASM (Available Seat Miles). That is, variable costs (fuel, maintenance, landing fees, etc.) will increase as more jets fly. For Q3, Southwest expects ASM to be down by approximately 25% year-over-year. Revenue, on the other hand, will be a function of ASM and load factor — more flights and more passengers per flight will increase revenue. In Q3, load factor is expected to be 40%. 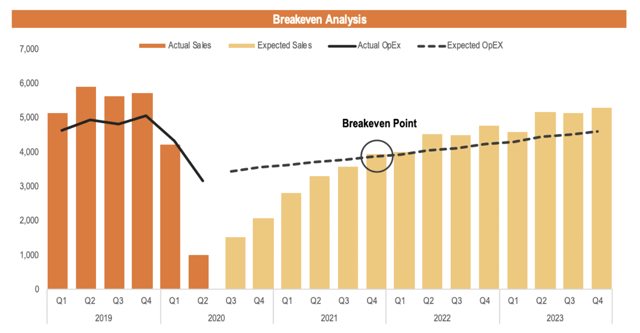 Assuming cost inflation of 2% year over year and incrementally rising fuel costs as demand returns, my model forecasts that Southwest will breakeven in Q4 2021. It is important to note that my calculations do not include special items such as PSP funds since these special items are temporary and therefore, should not be included in the projection. I have also factored in air ticket discounts at varying levels for each year in my forecasting model. Of course, there are other factors worth considering such as layoffs (or lack thereof), another lockdown, or weaker-than-expected consumer confidence, but I think breaking even in Q4 2021 is feasible for Southwest.

Excluding special items, I expect Southwest to burn at least $7.1 billion until its breakeven point in Q4 2021.

Earlier in March, President Trump signed the Coronavirus Aid, Relief, and Economic Security Act, or CARES, of which $25 billion were distributed towards passenger airlines in the form of grants and loans. The pie chart below shows the estimated amounts that each airline received. Southwest managed to bag in $3.2 billion from the pot. 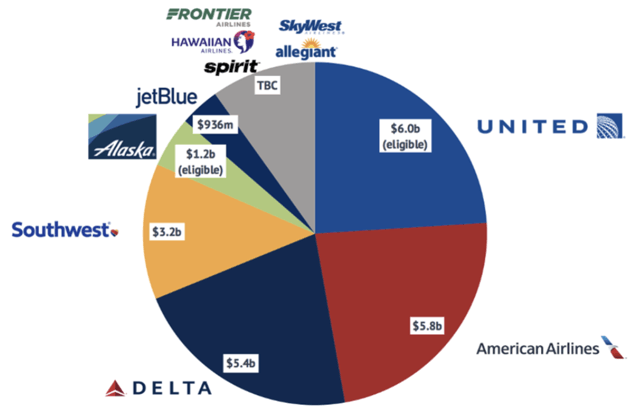 In the Q2 earnings release, management gave an update of the company’s liquidity:

With my estimated $7.1 billion cash burn before a return to profitability, the $14.5 billion cash in hand seems to be more than enough to cover operating losses in the next couple of years. I believe management is preparing for the worst by raising as much capital as they possibly can. Southwest also has the option to participate in a $2.8 billion secured loan program under the CARES Act or do additional sale-leaseback on some of its owned aircrafts to improve short-term liquidity, although I believe such transactions would not be necessary. Taking a look at the numbers, Southwest seems to be in a really good position to survive the storm.

Going into the pandemic, Southwest has arguably the best balance sheet in the airline industry. Below shows Southwest’s profitability and financial strength as compared to its competitors, at the end of 2019. In terms of profitability, Southwest had the highest ROIC and free cash flow margin. Its operating margin is still above average despite their most fuel-efficient jets, the 737 MAXs, being grounded for most of 2019. Threat is most prominent to the right side of Southwest as ULCCs are aggressively gaining market share, as shown by their high revenue growth over the last 5 years. Thus, I am more concerned about this group of airlines as Southwest primarily competes with them — just like Southwest, ULCCs run a point-to-point system, instead of the hub-and-spoke model that legacy carriers operate on.

Taking a look at the balance sheet, Southwest has an average current ratio and quick ratio. However, the company is the least leveraged among its competitors. Debt to EBITDA and debt to equity are the lowest among the group. Its interest coverage is also the highest. In addition, while competitors generate revenues of one to two times of their total debt, Southwest is able to produce revenues almost six times its total debt. All these prove one thing: Southwest has one of the most profitable business model while operating with the least financial leverage. If there’s one airline that’d be in the best position to survive the pandemic, it’s Southwest.

Even though Southwest appears to be in the best position to recover from pandemic-related damages, there are a number of risks worth considering. The most obvious would be the risk of another lockdown due to the recent spike in COVID-19 cases across the United States. Another would be the later-than-expected vaccine introduction, thus prolonging social distancing measures and travel restrictions. Furthermore, road travel seems to be more favored as people are not exposed to potentially-infected strangers. Plus, oil prices are low at the moment. More Southwest-specific, a prolonged grounding of the 737 MAX may hurt the company’s bottom line, although it’s arguable that Southwest won’t need more planes at the moment. Finally, airlines may be forced to leave middle seats empty. If such a regulation is enforced, Southwest may not be hugely impacted by the rule — Southwest’s fleet is made up of Boeing 737s, which based on the chart below, allow for the highest maximum occupied seats if middle seats were restricted. 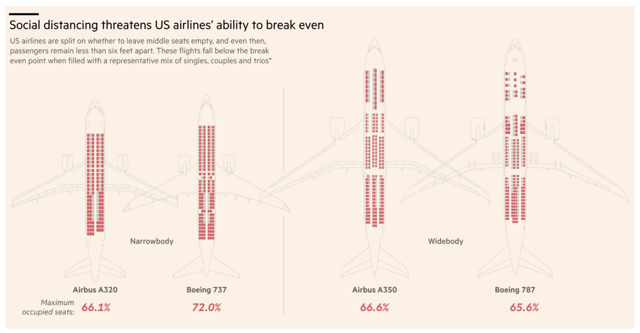 The risks are undoubtedly very high, which is why the markets are discounting the price of airline stocks today. But opportunities arise in times of chaos, especially for low-cost carriers like Southwest. While legacy carriers struggle with their mounting debt load, Southwest, with its smaller size and cost advantages, can steal market share from legacy carriers. For the next few years, while legacy carriers pay down their debt, Southwest has the opportunity to invest in expansion initiatives. In this type of environment, low-cost players have the upper hand.

The table above shows the big 4 carriers’ profitability over the last 15 years. We can see that Southwest is the only carrier that maintained profitability, even during the Great Financial Crisis. While it’s 47-year profitability streak will surely be broken this year, Southwest has the proven track record to emerge victorious once again. As discussed earlier, Southwest has more than enough liquidity to cover its projected $7.1 billion cash burn before returning to profitability. The company will certainly face tough competition from ULCCs and pandemic-related headwinds, but judging by their financial performance and strength, Southwest will, in my opinion, be able to endure through them. Southwest is facing a double whammy from the coronavirus and the 737 MAX grounding, which puts massive pressure on its stock price. The stock is currently trading 50% below its all-time highs, a bargain price for what seems to be the most defensive airline today.

Disclosure: I am/we are long LUV. I wrote this article myself, and it expresses my own opinions. I am not receiving compensation for it (other than from Seeking Alpha). I have no business relationship with any company whose stock is mentioned in this article.

Debasing The Dollar? (Or Inflation…