Delek US Holdings: The Dividend Remains Risky Despite Optimism From Management

Delek US Holdings: The Dividend Remains Risky Despite Optimism…

When Delek US Holdings (NYSE:DK) released their results for the first quarter of 2020, they remained steadfast behind their dividend for the time being despite the carnage that the Covid-19 pandemic and resulting lockdowns had inflicted. Although their dividend yield of almost 7% certainly looks appealing in this low interest rate world, it nonetheless remains risky even though management had previously struck an optimistic tone.

Since many readers are likely short on time, the table below provides a very brief executive summary and ratings for the primary criteria that were assessed. The following sections all provide further detailed analysis for those readers who are wishing to dig deeper into their situation. 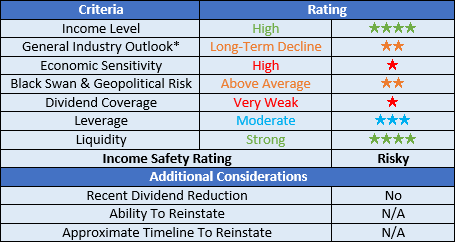 There are significant short- and medium-term uncertainties for the broader oil and gas industry; however, in the long term, they will certainly face a decline as the world moves away from fossil fuels.

Recently I have taken actions to make my analysis more comparable between different companies and partnerships by introducing a more standardized rating system. A list of all my equivalent ratings as well as more information regarding my rating system can be found in the following Google Document. Whilst the list is only small at the moment, please check back across time since it will continue growing in tandem as my coverage continues growing. 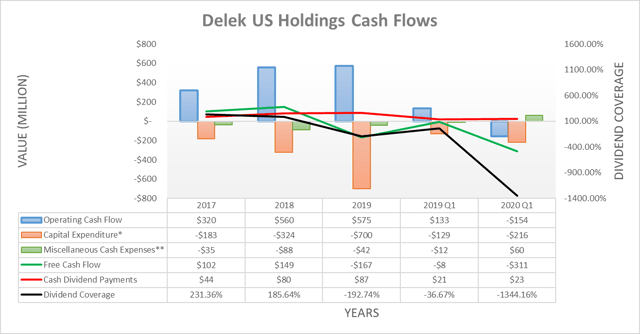 Instead of simply assessing dividend coverage through earnings per share, I prefer to utilize free cash flow since it provides the toughest criteria and best captures the true impact to their financial position. The extent that these two results differ will depend upon the company in question and often comes down to the spread between their depreciation and amortization to capital expenditure.

It can be seen that historically speaking their dividend coverage has varied due to capital expenditure, which is largely to be expected for a cyclical, capital-intensive company. Whilst it was very strong during 2017-2019 at an average of 208.50%, their surge in capital expenditure during 2019 pushed it down to very weak territory at negative 192.74%. Overall these two extremes balance out and thus it seems that their dividend coverage is adequate during periods of normal operating conditions, being neither particularly strong nor particularly weak.

When looking at their performance during a downturn such as this latest one and their dividend coverage is unsurprisingly very weak. During the first quarter of 2020, their operating cash flow fell to negative $154m from a positive $133m during the equivalent period year on year. It should be needless to explain with calculations that negative operating cash flow is a very significant problem for the sustainability of a dividend and thus during downturns their dividend coverage drops from adequate to very weak.

Despite the significant impact that they endured during the first quarter of 2020, the management remained optimistic regarding their dividend with the following comments. When they release their results for the second quarter of 2020, it would not be surprising to see them taking a less optimistic tone.

The extent of pain that they felt during the second quarter of 2020 will not be known until their results are released in the coming weeks. Although the more concerning aspect that is already known is the recent surge in new Covid-19 cases sweeping across the United States, as the graph and map included below displays. Life may be somewhat normalizing for some people in certain areas of the country, and this still clearly shows that the underlying issue has not improved recently and thus the prospects of further tough operating conditions are a very real possibility for the foreseeable future. 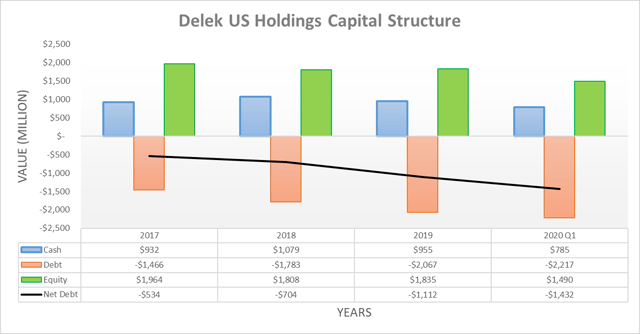 Following their relatively high capital expenditure during 2019 and negative operating cash flow during the first quarter of 2020, it comes as no surprise that their net debt has approximately doubled from $704m at the end of 2018 to $1.432b. The extent that this threatens the sustainability of their dividend and overall ability to navigate this unpredictable downturn will depend upon their leverage and liquidity.

Some investors may be tempted to exclude the assets and liabilities that are attributable to their listed midstream Master Limited Partnership Delek Logistics Partners (NYSE:DKL). I believe that this would not be prudent since after all they own a controlling stake and thus any investment in Delek US Holdings is also indirectly an investment in Delek Logistics Partners too. 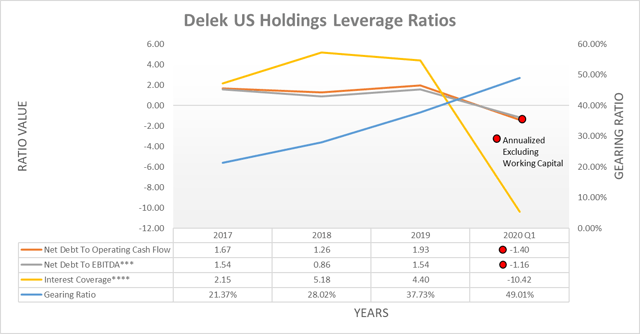 When reviewing these financial metrics, making exact judgments regarding their leverage is rather tricky due to the carnage in the first quarter of 2020 that sent all bar their gearing ratio into negative territory. Normally a gearing ratio of 49.01% would represent high leverage, as deemed by a result between 30.01% and 50.00%. Whereas with their net debt-to-EBITDA at the end of 2019 sitting comfortably between 1.01 and 2.00 at only 1.54, it would normally represent low leverage, at least during periods of normal operating conditions.

Ultimately the differences between these considerations were split and their leverage was deemed to be moderate, which does not necessarily threaten their ability to remain a going concern but nonetheless is still not ideal. Since they are a relatively small company in a highly capital-intensive industry at the cusp of increasingly unpredictable times, it would not be surprising to see them reduce their dividend to preserve their financial strength and thereby ensuring that they can continue investing adequately. 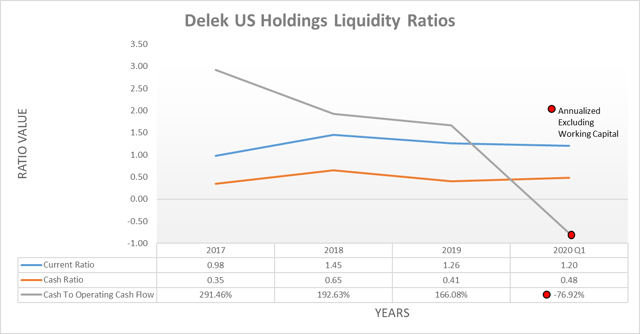 Whilst their moderate leverage is not ideal, thankfully the opposite is true for their strong liquidity that provides solid support to their overall financial position and thus their ability to navigate this downturn. This judgment was only just marginal and was a tossup between adequate and strong, as the probability of cash outflows to sustain their dividend will continue degrading their otherwise strong liquidity. If it were not for their revolving credit facility still retaining $900m available, this situation would have been considerably riskier in the short term. When looking into the medium to long term, obviously this cash outflow will have to cease; otherwise, it would eventually weaken their liquidity.

The majority of their debt is comprised of their term loan credit facility and does not mature until 2025, as the table included below displays. This provides them with ample time to navigate this downturn and worry about refinancing at a later date; however, they would likely want to ensure their leverage remains reasonable to ensure this goes smoothly.

On one hand, the worst could be behind them if the Covid-19 pandemic and resulting lockdowns were to ease, but that remains a risky assumption and thus in turn keeps their dividend risky despite previous optimism from management. At the end of the day, a relatively small company in a highly capital-intensive industry facing an unpredictable downturn is not necessarily a textbook example of a safe dividend and thus shareholders should hope for the best but brace for a reduction. Whilst it remains possible that their dividend will survive this downturn without seeing any reductions, I believe that a neutral rating is appropriate until more time has elapsed.

Notes: Unless specified otherwise, all figures in this article were taken from Delek US Holding’s Q1 2020 10-Q (previously linked), 2019 10-K and 2017 10-K SEC Filings, all calculated figures were performed by the author.

Why I Trimmed My Position…

Phillips 66 And The Future…