Cobalt Miners News For The Month Of June 2020

Cobalt Miners News For The Month Of June 2020

Welcome to the June 2020 cobalt miner news. The past month saw cobalt prices slightly lower and a not so busy month for the cobalt producers but plenty of good news from the cobalt juniors.

As of June 19, the cobalt spot price was US$13.09/lb, slightly lower than US13.38/lb last month. The LME cobalt price is US$28,850/tonne. LME Cobalt inventory is 602 tonnes, about the same as last month (603 tonnes). More details on cobalt pricing (in particular the more relevant cobalt sulphate), can be found here at Benchmark Mineral Intelligence or Fast Markets MB. 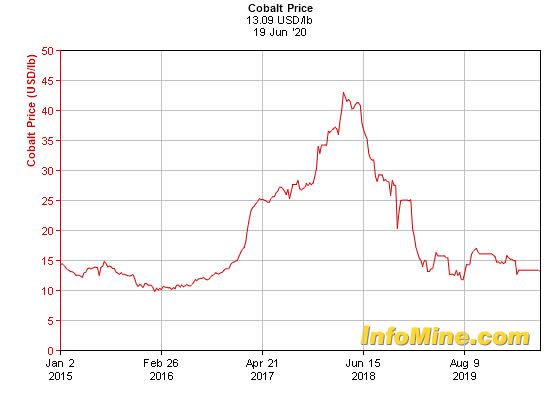 Top Cobalt production by country….. According to the latest US Geological Survey numbers, global supply decreased in 2019, down slightly to 140,000 metric tons [MT] from 148,000 MT the previous year.

Electric vehicle rally to maintain demand for battery metals despite Covid-19. Although subdued as a result of Covid-19, demand for battery metals, including cobalt, lithium and copper, will remain strong as a result of growth in the global electric vehicles [EVs] market, business intelligence company CRU UK cobalt, lithium and battery markets senior analyst George Heppel said this week……However, Heppel pointed out that, interestingly, although the automotive market as a whole had been hit hard by Covid-19, the EV sector had actually had a few good months, all things considered.

On May 25 Smart Company reported:

Bill Gates and Richard Branson have their sights on the mining sector — and investment opportunities for startups abound. Among those leading the charge are tech billionaires Bill Gates, Jeff Bezos and Richard Branson — all backers of technology fund Breakthrough Energy Ventures [BEV]. Last year, BEV joined forces with hedge fund a16z to invest in mineral exploration company KoBold Metals and its search for ‘ethical’ cobalt. The billion-dollar fund was also instrumental in raising $20 million in Series A funding for Lilac Solutions, a mining technology company focused on transforming lithium production.

Australian, India, sign joint deal on critical minerals. The agreement focuses on ways to increase bilateral trade, investment and research and development in critical minerals…… Australia is broadening its push to supply minerals such as lithium and rare earths to strategic trade partners after it signed several similar agreements with the United States in the past two years, most recently in November. Resources Minister Keith Pitt said in a statement that Australia has the potential to be one of the top suppliers of cobalt and zircon to India, being in the top three for global production of these minerals.

EV sales in 2020 to match 2019 despite Covid-19: IEA. Demand for battery metals such as lithium, nickel and cobalt will increase sharply. Demand is also expected to increase for other metals used in drive trains such as rare earths and metals used in charging stations, such as copper and steel.

Glencore Plc will sell cobalt to Tesla Inc. for use in vehicles being produced at new car plants in China and Germany, according to a person with knowledge of the matter. The deal could involve Glencore supplying as much as 6,000 tons of the metal a year for lithium-ion batteries that power electric cars. The agreement is in line with other recent contracts the trading giant-cum-miner has struck, including a four-year deal in February to supply as much as 21,000 tons to battery producer Samsung SDI Co. Ltd……Glencore last year agreed multi-year plans to sell about 30,000 tons of cobalt to SK Innovation Co. and at least 61,200 tons to China’s GEM Co. BMW AG also agreed to buy cobalt directly from Glencore’s Murrin Murrin mine in Australia.

Katanga Mining completes amalgamation transaction. Pursuant to the Amalgamation, Shareholders other than Glencore International AG (“GIAG”) are entitled to receive C$0.16 in cash for each pre-Amalgamation common share of the Company (“Common Share”), for aggregate consideration of C$52,722,015.68. As a result of the Amalgamation, the Company is now wholly-owned, directly or indirectly, by GIAG.

Note: In April 2020 it was announced that Glencore would take Toronto-listed Katanga Mining private, with an offer of C0.16 per share.

On May 28 The Financial times reported:

China’s top cobalt producer halts buying from Congo miners…..China’s biggest cobalt producer is to stop buying from individuals in the Democratic Republic of Congo, bowing to pressure from customers and rights groups concerned about child labour in the country’s informal mining sector……In December it was named alongside technology companies including Apple, Dell and Microsoft in a US class-action lawsuit filed on behalf of families of children killed or injured while mining cobalt in the central African nation……Most of the DRC’s cobalt is shipped to China to be refined and processed. Up to 20 per cent of its output comes from individual miners, who dig for the metal by hand without safety protection. Despite the pullback, Huayou aims to produce 30,000 tonnes of cobalt this year, mainly from its industrial mines in the DRC but also through recycling used batteries.

ERG own the Metalkol facility in the DRC where ERG processes cobalt and copper tailings with a capacity of up to 24,000 tonnes of cobalt pa.

EIB grants €125 million loan to support Umicore’s European rechargeable battery materials activities. Umicore has concluded a € 125 million loan agreement with the European Investment Bank [EIB]. The proceeds of the loan, which has a maturity of eight years, will finance part of Umicore’s investment in the cathode materials plant in Nysa, Poland. Once completed, this greenfield plant will supply the European operations of Umicore’s global battery cell and automotive customers.

Umicore launches an offering of €500 million in convertible bonds due 2025……The net proceeds of the offering will be used for general corporate purposes and to fund Umicore’s strategic developments in the areas of clean mobility materials and recycling. This offering will further strengthen and diversify Umicore’s funding structure by complementing the €1.1 billion of medium- and long-term, fixed-rate private placement debt secured in recent years.

Towards the creation of a Solar Energy Society for 2050 start of initiatives based on a vision co-creation partnership with Tohoku University.

On May 31, MMC Norilsk Nickel announced:

Nornickel disposes of Honeymoon Well nickel project in Australia. Nornickel……announces that through its Australian subsidiary, MPI Nickel Pty Ltd, it has entered into a definitive agreement with BHP Billiton Nickel West Pty Ltd (“BHP” or “the Buyer”), a wholly owned subsidiary of BHP Group Limited, to sell its Honeymoon Well Nickel Project (“the Project”) for an undisclosed amount.

Sherritt announces amendments to its transaction to improve its capital structure and additional noteholder support.

Conic Metals was formed from the Cobalt 27 spin-out. Conic Metals offers broad exposure to nickel and cobalt through a 8.56% JV interest in Ramu, 11 royalty investments, and an equity share of ~7% of Giga Metals Corporation.

Clean TeQ has 132kt contained cobalt at their Sunrise project.

Clean TeQ Sunrise Project Update……Project Execution Plan: The Company has been progressing the Project Execution Plan [PEP] in conjunction with Fluor Australia Pty Ltd, part of the Fluor global engineering group headquartered in Irving, Texas. Financing Update: The partnering process the Company has been running, with the support of Macquarie Capital, remains on-going. Although good interest has been expressed by a number of parties through that process, and engagement across the EV supply chain continues, to date the Company has not been able to secure an investment partner for the Project.

In total, Ardea has 405kt of contained cobalt and 5.46mt of contained nickel at their KNP Project near Kalgoorlie in Western Australia.

On May 28, Ardea Resources announced:

KNP R&D advances. Ardea Resources Limited [Ardea] is developing its Kalgoorlie Nickel Project [KNP], starting with the flagship Goongarrie Nickel Cobalt Project [GNCP] which is a “state-of-the-art” battery metals and new technology minerals project. Innovative Research and Development [R&D] is a key pillar of the metallurgical programs completed by Ardea. The quality of the KNP/GNCP research has been recognised with a $2 million R&D Tax Offset being received from the Federal Government Australian Tax Office.

Australia’s opportunity in the global cobalt industry – featuring Cobalt Blue…..The company’s sights are set on becoming a pioneer for Australia’s domestic battery industry through its Broken Hill cobalt project in New South Wales. Broken Hill is designed to operate as both a cobalt mine and refinery that produces battery-ready cobalt sulphate, which will give the company significant advantages and control over its resource, according to Cobalt Blue chief executive Joe Kaderavek. “We are working collaboratively via a three-year partnership with the Australian Government’s Future Battery Industries Project and major domestic lithium, nickel and manganese producers to assess whether Broken Hill cobalt can supply a future Australian battery industry,” Kaderavek tells Australian Mining.

Note: Investors can learn more by reading my article “Havilah Resources Has Huge Potential and/or my update article. You can also view my CEO interview here, and the company presentation here.

For more information you can read my article: “Aeon Metals May Have A World Class Copper And Cobalt Sulphide Resource In Northern Australia.“

GME Resources own the NiWest Nickel-Cobalt Project located adjacent to Glencore’s Murrin Murrin Nickel operations in the North Eastern Goldfields of Western Australia. The NiWest Project which has an estimated 830,000 tonnes of nickel metal and 52,000 tonnes of cobalt.

Investors can view my CEO interview here, and an investor presentation here.

Barra is developing the Mt Thirsty project, which is a 50/50 joint venture with Conico, to produce cobalt suitable for the metal, chemical and battery markets. Barra is has two promising gold projects in Western Australia.

Other juniors and miners with cobalt

I am happy to hear any news updates from commentators. Tickers of cobalt juniors I will be following include:

Highlights for the month were:

As usual all comments are welcome.

Thanks for reading the article. If you want to sign up for Trend Investing for my best investing ideas, latest trends, exclusive CEO interviews, chat room access to me, and to other sophisticated investors. You can benefit from the work I’ve done, especially in the electric vehicle and EV metals sector. You can learn more by reading “The Trend Investing Difference“, “Subscriber Feedback On Trend Investing”, or sign up here.

Additional disclosure: The information in this article is general in nature and should not be relied upon as personal financial advice.