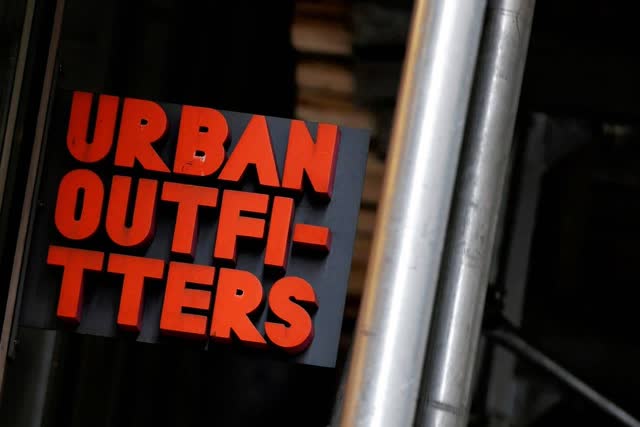 The earnings season has been tough for retailers, particularly those reliant on sales through physical locations. The coronavirus has caused demand destruction within the retail space. Millions have been stuck at home amid shelter-in-place policies. Most shopping has been done online, if at all. That hurt Urban Outfitters’ (URBN) top line in its most recent quarter. The company reported total revenue of $588.48 million, down 32% Y/Y.

The retail operations fell 28% Y/Y, while wholesale fell over 70%. Nully, the company’s subscription rental business, generated $6 million in revenue. The brand was launched in the third quarter of last year, so there are no comparisons to the year-earlier period. 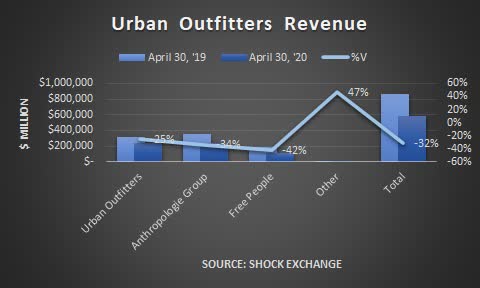 Revenue from Urban Outfitters, Anthropologie and Free People fell 25%, 34% and 42%, respectively. Comparable sales for the entire company were off 28%. Companies with strong digital platforms have fared relatively well during the pandemic. The company’s digital business generated double-digit sales around the world; online sales performed best in Europe, growing by over 30%. Urban Outfitters will likely have to rely heavily on digital sales for the rest of the year as the economy slowly reopens. This could be an opportunity for the company to distance itself from retailers with weaker online platforms.

About 280 of its stores have reopened (over 40% of total stores). Urban Outfitters expects to open another 100 stores this month. While stores move to become fully operational, the company’s digital sales and ability to use physical locations as fulfillment centers should be able to pick up some of the slack. That said, revenue and earnings could remain stagnant until the pandemic subsides.

The fallout was that EBITDA was -$156 million, about $550 million lower than that of the year-earlier period. For the quarter ended April 2019, Urban Outfitters had an EBITDA margin of around 46%. If the company could simply break even by the end the year, then that could be considered a win. If consumers shun purchases of non-essential items, then Urban Outfitters could be hard-pressed to avoid more operating losses.

A strong balance sheet could be a differentiating factor for retailers going forward. Urban Outfitters finished the quarter with $654 million in cash and working capital of $513 million. A bright spot was its ability to manage inventory:

We rapidly reacted to changing consumer demand and reduced inventory receipts leaving our retail segment inventory down 18% at quarter end. We reduced our SG&A expense plans through a hiring freeze, Board and Executive pay reductions, suspension of raises and bonuses, employee furloughs, as well as reductions in non-payroll expenses in areas such as creative and marketing.

Inventory was $335 million, down from $409 million after the holiday season. Managing inventory allowed the company to free up capital that could be used to fund future losses. Nonetheless, Urban Outfitters’ free cash flow was -$103 million. The company borrowed $220 million in debt to help fund itself during the quarter. I expect more cash burn next quarter, which could lead to more borrowing to fund losses.

Urban Outfitters’ last 12 months (“LTM”) EBITDA is negative. Based on EBITDA of $390 million for the fiscal year ended January 2020, its debt load appears manageable. The company had a pristine balance sheet prior to the pandemic. This gave Urban Outfitters the leeway to fund itself with debt until consumers return to stores en masse.

URBN is down over 25% Y/Y. I rate the stock a Sell until it stops hemorrhaging cash. That could take a while.

I also run the Shocking The Street investment service as part of the Seeking Alpha Marketplace. You will get access to exclusive ideas from Shocking The Street, and stay abreast of opportunities months before the market becomes aware of them. I am currently offering a two-week free trial period for subscribers to enjoy. Check out the service and find out first-hand why other subscribers appear to be two steps ahead of the market.

Pricing for Shocking The Street is $35 per month. Those who sign up for the yearly plan will enjoy a price of $280 per year – a 33% discount.