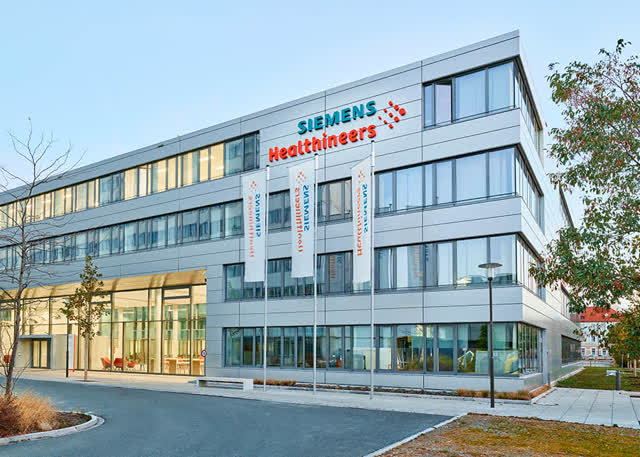 I’m always on the lookout for interesting options to broaden my portfolio. In healthcare, I currently own Amgen (NASDAQ:AMGN) and Omega Healthcare (NYSE:OHI), and they give me exposure to biotech and senior care respectively.

Recently, medical technology has caught my eye as a potential route for further diversification within the sector.

With the first option still part of the GE morass, and Philips in transition mode, let’s take a closer look at the German giant and test its investment credentials. 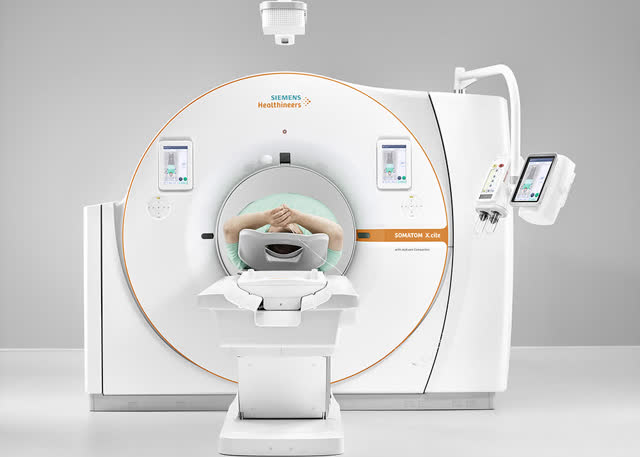 Healthineers (OTC:SEMHF) is one of the world’s leading medical technology companies. While it is best known for imaging products such as MRI, CT and x-ray scanners, it is also a global player in diagnostics and advanced therapies. Originally a part of the Siemens (OTCPK:SIEGY) conglomerate, Healthineers went public in 2018 with 15% of the company offered to shareholders. Dr. Bernd Montag is CEO of a company with a direct presence in over 70 countries and over 52,000 employees. The market cap is almost €46 billion.

In May, Healthineers announced revenue of €3.7 billion and adjusted earnings per share of €0.45 for its 2020 second quarter. The results – a 3.3% increase on the previous year – were quite strong given the emergence of Covid-19.

Imaging (+5.8%) and advanced therapies (+5.7%) performed well year-on-year, but diagnostics dropped by -2.2%. With fewer people in hospitals for non-Covid-19-related procedures, testing understandably dropped off.

Cash flows took a considerable hit due to a build-up of inventory for the coronavirus. Operating cash flow (€213 million) and free cash flow (€83 million) both dropped by high double digits y-o-y. Healthineers had €845 million of cash-on-hand at quarter’s end.

The most significant story out of Q2 earnings was the withdrawal of 2020 guidance:

“Due to the COVID-19 pandemic, the assumptions underlying our original forecast for fiscal year 2020 are to a large extent no longer applicable. Accordingly, the growth targets we originally communicated for comparable revenue growth and adjusted basic earnings per share of Siemens Healthineers are no longer valid from today’s perspective, and are not likely to be achieved.”

Management expects the current quarter to be the worst of it in terms of financial performance.

If you can believe it, x-ray technology is 125 years old this year and Siemens unveiled its first machine way back in 1896. Today, Healthineers is still the number one player in this field along with more modern imaging areas like magnetic resonance imaging (MRI), computed tomography (CT) and molecular imaging. 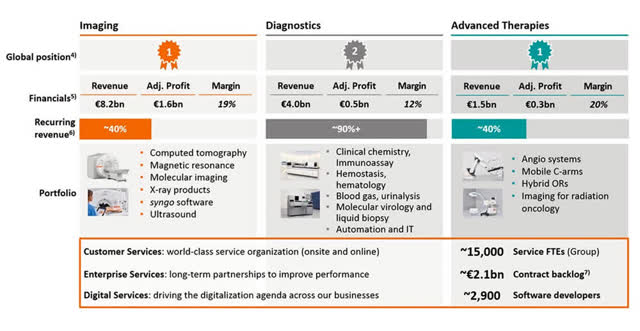 Worldwide, there is an oligopoly of three companies in medical imaging and advanced therapies with Healthineers joined in the club by General Electric and Phillips. The diagnostics market is more competitive with Roche (OTCQX:RHHBY), Danaher (DHR) and Abbott (ABT), significant players, along with numerous smaller companies.

Healthineers is heavily dependent on imaging with it accounting for €9 billion (62%) of revenue in 2019. The company has a considerable foothold in the sector with over 230,000 devices installed worldwide. Revenue from servicing these machines amounts to 40% of the segment total and is growing at 5% per annum.

The Covid-19 crisis has brought healthcare companies to the fore when it comes to public health, media coverage and the markets. There is a particular focus on testing for both the virus and antibodies.

There has been plenty of coverage of Abbott’s ID NOW COVID-19 rapid tests which arrived early on the scene. The FDA issued a press release warning of “potential inaccurate results” with ID NOW, but in a recent ongoing study, Abbott said that its test accurately detected the coronavirus 94.7% of the time.

Swiss healthcare giant Roche claims that its test is 99.8% accurate at detecting Covid-19 antibodies. Its product, Elecsys Anti-SARS-CoV-2, has already been approved for emergency use authorization by the FDA.

For its part, Healthineers has joined the fray and developed tests to detect both the virus and its antibodies. The firm’s antibody test is supposed to be 99% accurate and will be available to large labs by the end of May. Healthineers hopes to supply 25 million tests from June thanks to an upgrade at its site in Walpole, Massachusetts.

If Healthineers’ tests are as accurate as suggested, they should be much in demand over the coming months as countries attempt to safely reopen their economies.

While Healthineers is a dominant force in imaging and advanced therapies, diagnostics is a different story.

Roche is the big cheese in this sector with €11.6 billion of sales in 2019. That’s almost three times the equivalent revenue for Healthineers. And that’s not all, Philips, Abbott, Danaher and General Electric are also in the mix.

What must be most disappointing for the company is that it was strongly placed back in 2008 before a series of missteps with testing platforms. When Healthineers went public, CEO Montag conceded that it has struggled in the space: 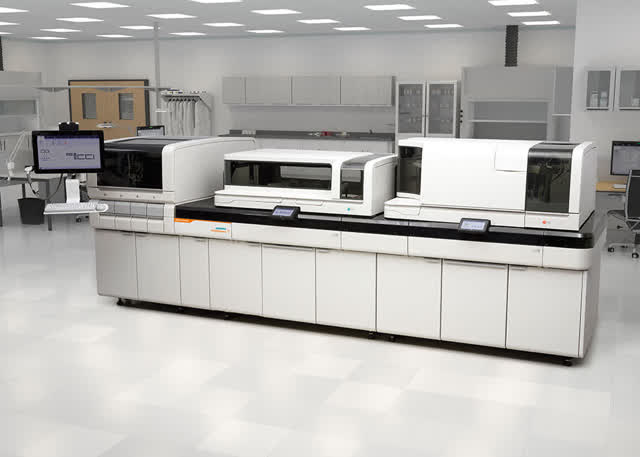 Management hopes that it has rectified these issues with its new Atellica machines which are highly customizable and can complete up to 440 tests per hour.

At the IPO, Healthineers hoped to have 7,000 Atellica units shipped by 2020. Progress has been slow with 2019 estimates missed, but Healthineers did receive an important boost in February 2020. Quest Diagnostics (NYSE:DGX) will order 120 Atellica machines and use them as its primary equipment for immunoassay testing in future.

Management completed a round of buybacks between September 2019 and January 2020. Healthineers spent €69.7 million buying 1.8 million shares for an average price of almost €39. With the price of shares currently around €46, management got reasonable value.

In terms of rewarding shareholders, Healthineers paid a dividend of €0.70 for 2019. Reassuringly for investors, management wants to “provide an attractive return to shareholders” and intends “to pay an annual dividend in the amount of 50% to 60% of the net income of the respective prior fiscal year”. 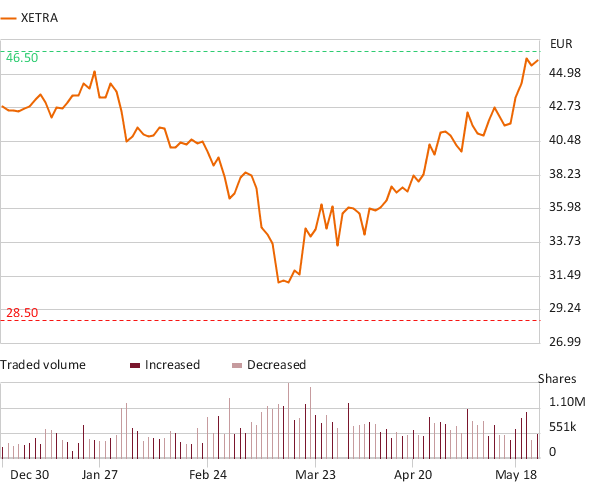 Before guidance was withdrawn, management expected EPS growth this year of somewhere between 8% and 14%. If we use a hypothetical growth rate of 10% (without Covid-19), the company may have earned around €1.73 this year. That would give us a forward P/E (without Covid-19) of just over 26, which is still too high for my liking.

As part of the company’s 2025 plan, it’s aiming for 10% EPS growth year-over-year. Now that may not happen given the pandemic, but if it does, Healthineers would have a PEG ratio of 2.9 which is still overvalued.

I have to say that Siemens Healthineers is my sort of company. It has an outstanding heritage, strong position in most markets, growing dividend and solid financial base.

While it is especially strong in imaging and advanced therapies, I think there will be growth in the diagnostics unit when Covid-19 tests roll out.

Healthineers is an excellent, stable business, but you certainly have to pay a lot for that. It’s remarkable to me that it has P/E ratios in the high 20s when the company’s own strategy hopes for annual growth of only 5-10%.

If not for the rich valuation, I would consider adding Healthineers to my portfolio. But for the moment, I’m going to wait for a dip.

Disclosure: I am/we are long OHI, AMGN. I wrote this article myself, and it expresses my own opinions. I am not receiving compensation for it (other than from Seeking Alpha). I have no business relationship with any company whose stock is mentioned in this article.