3D XPoint was developed by Micron (NASDAQ:MU) and Intel (NASDAQ:INTC) as a non-volatile memory technology (information, bits, remain preserved if power is turned off) with much higher density (and hence, lower cost) than DRAM, but with much higher performance (lower latency) than flash 3D NAND. While not exactly providing the best of both technologies, it has found a viable niche as a storage-class memory (SCM) tier that sits between both technologies in the memory hierarchy. 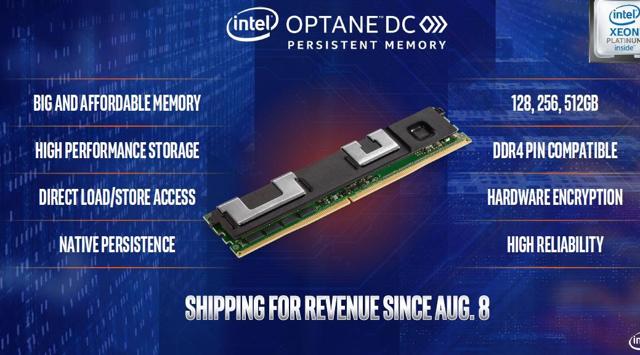 With Intel not having any stake in DRAM, the company views this as a disruptive (differentiated) technology given its described properties, hence why the company is pursuing it. It could offer competitive performance to DRAM at a much lower cost per GB, in its DDR4-compatible variant (DIMM factor). Intel thinks there is an $8 billion market in the data center for 3D XPoint (sold as Optane Persistent Memory). It’s not known if 3D XPoint is profitable yet for Intel, though.

The first products launched in early 2017 as SSDs. However, adoption likely hasn’t been stellar as it has a cost per bit disadvantage compared to SSDs, in storage. However, the story should be markedly different in the DDR4 pin-compatible form factor, as alternative to DRAM. Here, Optane has the large cost per bit advantage as well as a better roadmap for further improvements. Optane Persistent Memory launched with Xeon Scalable Cascade Lake early last year.

To summarize, there are two distinct product families for 3D XPoint memory:

Intel has a full roadmap for both product categories: 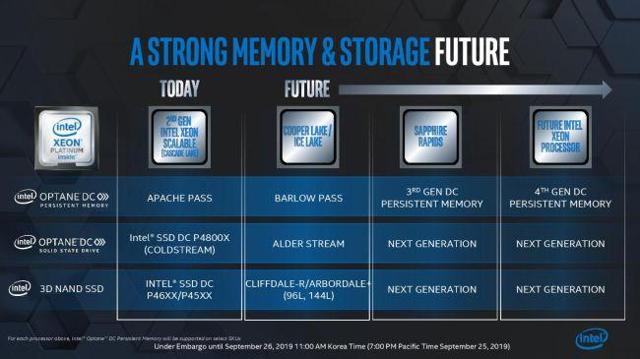 This year (or perhaps early next year) will see the introduction of Barlow Pass (DIMM) and Alder Stream (SSD) based on second generation 3D XPoint memory, with four instead of two layers to double its density. Intel said Alder Stream reduces latency by 3x and improves performance by 4x.

Micron’s X100: Not a threat to Intel, Intel far ahead

As Mr. Breezy discussed recently, he thinks Micron’s X100 will steamroll over Intel’s Optane products, based on its very compelling specifications. Nevertheless, Intel investors shouldn’t be worried yet about this segment for several reasons.

Secondly, the X100 is an SSD, not the DDR4 form factor (as DRAM ‘companion’ or even replacement) that I am especially bullish about. After all, the disruptive nature in 3D XPoint lies in its capacity and cost advantages vs. DRAM. Not necessarily SSDs where they offer higher performance at a corresponding premium cost.

Thirdly, the X100 is likely based on second generation 3D XPoint. In October, Intel detailed its memory and storage roadmap. The company also teased the performance of its Alder Stream NVMe SSD, which should be Intel’s real competitor to the X100. While Intel cut off the graph (so the full performance can’t be seen, although Intel said 4x), the gains look impressive. Alder Stream is represented by the orange dots:

Simply put, both Intel and Micron have access to the same 3D XPoint technology (as the second generation was still co-developed), so there should be no fundamental reason why one company’s 3DXP silicon would significantly lead or trail in performance or cost compared to the other.

Lastly, as Advanced Micro Devices (NASDAQ:AMD) fans like to point out in the CPU market, competition will be good for everyone. While Micron will likely gain some market share, in my view an additional supplier of 3D XPoint/SCM will only help to accelerate the adoption, as it still in the early stages, and increase the market size of 3D XPoint, as it is no longer just something that one company is doing (i.e. a “monopoly”).

Competition from Micron should help Intel to establish the strongest possible roadmap.

This should provide more assurance to customers that 3D XPoint will have a competitive future and compel companies to look more seriously at the product category. A healthy market is always one with competitors.

Stephen Breezy noted that “AMD, Nvidia (NVDA), IBM (IBM), ARM, Xilinx (XLNX), and others will benefit directly” from the X100, presumably because Micron will make Optane persistent memory available on other platforms.

However, this statement seems premature. As noted, Micron’s X100 is just an SSD, not a DIMM where 3D XPoint’s performance is unconstrained. As such, it remains to be seen if Micron’s 3D XPoint DIMMs, which will presumably launch in the future, will enable compatibility with platforms from other vendors than the current Intel Cascade Lake platform. (Since Optane DIMMs don’t even work on Skylake-SP, this makes me assume that a CPU has to have specific changes to enable compatibility, so “benefit directly” seems premature.)

But to make others potentially benefit from this technology, there has to be a (meaningfully sizable) market in the first place, which there currently is not quite. So although it is true that as of now, Optane DC persistent memory indeed serves as a one additional value proposition for the Intel Xeon Scalable Platform, it is not a very large one since adoption is not very high (yet?).

But even if this unique selling point for Xeons would disappear in the future, then it would simply level the playing field of storage-class memory availability on platform, not move the storage-class memory advantage to another company. So by no means would any metaphors such as “marshaling” be applicable to Intel’s data center business with regards to 3D XPoint.

To sum up, Micron might, at best, spread 3D XPoint to other platforms. This will increase the market of 3D XPoint, which will benefit all vendors of the technology (i.e. Intel as well).

I see no fundamental reason why Intel wouldn’t be able to compete with Micron’s 3D XPoint offerings going forward, even if they have separated development. Intel stands to gain the most from the technology, anyway.

Technology/product leadership will remain key as ever to decide whose technology will be favored by customers of 3D XPoint. Intel and Micron shared 3D XPoint development until the second generation, so any major differences in time to market, performance and product characteristics should only start becoming notable from the third generation 3D XPoint memory, which is probably a few years away.

Intel and Micron have spent many years developing 3D XPoint as a new, viable memory technology. While adoption of Optane SSDs might have been below expectations, it finally launched in its most compelling form factor, as DDR4 pin compatible DIMM, last year with Cascade Lake.

Not just technologically might 3DXP become quite an important asset, but financially too. Intel has estimated the data center addressable market for 3D XPoint at $8 billion, although not as large as some other TAMs Intel has been throwing around, but it also has fewer competitors. 3D XPoint could eventually establish itself as another multi-billion dollar generating unit in Intel’s collection of data-centric businesses that includes Mobileye, Habana, Movidius, IoT, 3D NAND and Intel FPGAs.

Similar to how SSDs were once largely a niche early last decade despite their benefits, but eventually became mainstream, I think Intel will benefit further from 3D XPoint if it could find adoption for the tech beyond the data center, such as in (gaming) PCs. To that end, Intel and Microsoft are also working to bring Optane persistent memory to the desktop: 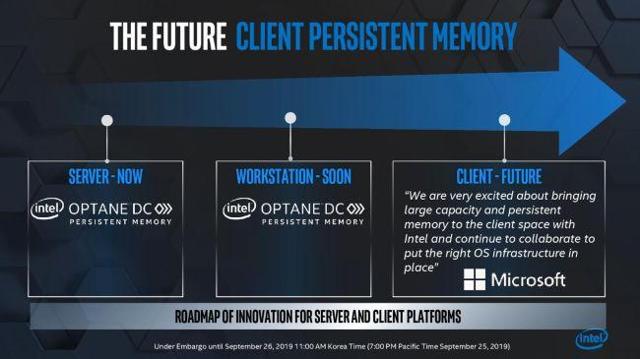 This might happen if cost comes down, which is driven by scale (volume) and density improvements (technology advancement). But as of now, the jury is still out on how big of a market exactly 3D XPoint will be able to serve over the longer term.

If Micron promotes 3D XPoint, I expect it will only lead to faster mainstream adoption of the technology and increase the overall market and, hence why its X100 should be be viewed in a more positive light in my opinion and I don’t see it as very detrimental. As of now, I don’t think the X100 will capture significant share as it has merely begun sampling, and Intel has a full roadmap too. Moreover, the X100 is still an SSD and not the most disruptive persistent memory (DIMM) form factor that will likely become the largest market for the technology.

Even if the X100 and Micon’s entrance in this space means facing competition, I would note that competition is where successful tech companies always have thrived in. To that end, Intel has a significant lead in collaborating and building up an ecosystem and partnerships by itself.

Overall, investors shouldn’t worry too much about Micron’s 3DXP products as long as overall adoption is small.