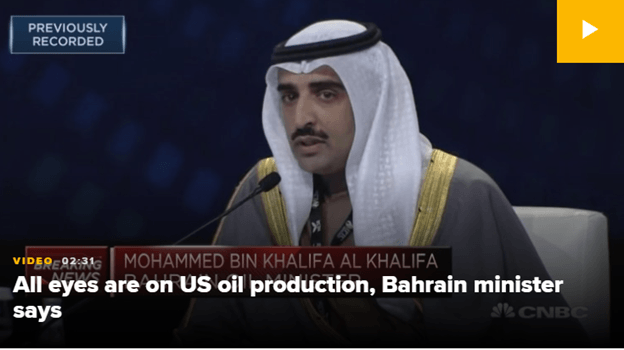 Speaking at the International Petroleum Technology Conference (IPTC) in Dhahran, Saudi Arabia, Bahrain’s Oil Minister Sheikh Mohammed bin Khalifa Al Khalifa explained why OPEC+ had to take the decision to intervene in the oil market beginning in 2016. He said it was justified because the U.S. government had intervened in the credit market first, enabling the shale revolution to get funded.

“We all believe in the dynamics of free markets. So why then was the OPEC+ decision warranted? I think it all started back a decade ago, when the financial crisis hit in 2008, you had quantitative easing in the U.S. and that made cheap credit available. And a lot of that cheap credit when to fuel the shale revolution. So in just a few years, we had four million barrels come out of nowhere. So it was an induced stimulus. It was not a free market action that gave you the oil glut. So either you wait a very long time to for that correct itself or you take necessary action.

I think very few people recognize the importance of that event in 2016 which OPEC and OPEC+, the kingdom of Saudi Arabia, took leadership, and his Royal Highness was there personally in charge of getting everybody to agree. And that decision really saved the oil market for us today. People will recognize this into the future, maybe they don’t recognize it today. But it was something that was extremely important to counterbalance what came out of the financial crisis, ended up giving you a glut of shale oil supply. And hence the balance that came into the market was through the leadership of that was shown by the kingdom of Saudi Arabia, OPEC, and the non-OPEC members of OPEC+.”

Going forward, all eyes are on U.S. production again. If there is going to be an extra million barrels, yes this will suppress oil prices. But the current indicators of rig counts, frac spreads, are telling you that is going to be a challenge.

So my recommendation is all eyes on U.S. production. If they can hit 14 million, then yes oil prices will extend a bit further, but eventually this sentiment of there is ample supply will shift, there will be a scarcity. When will it happen? In the next few years definitely. Will it happen by the end of this year? We will have to see.”

In revisionist-history form, the Bahrani oil minister left out what happened in November 2014. Saudi Oil Minister Ali Naimi declared a market share battle on shale oil at the Thanksgiving Day OPEC meeting in November 2014 with the intent of bankrupting American shale oil companies and driving their production down. 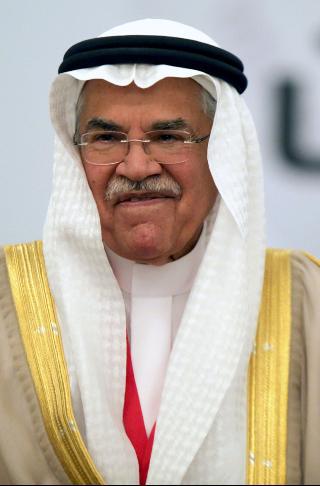 In an interview conducted by the Middle East Economic Survey (MEES), Ali Naimi was quoted as saying: “If I reduce, what happens to my market share? The price will go up and the Russians, the Brazilians, U.S. shale oil producers take my share.”

And Saudi Aramco (ARMCO) went on to flood the oil market to put shale oil producers out of business. And the price of oil fell to $26 in February 2016. 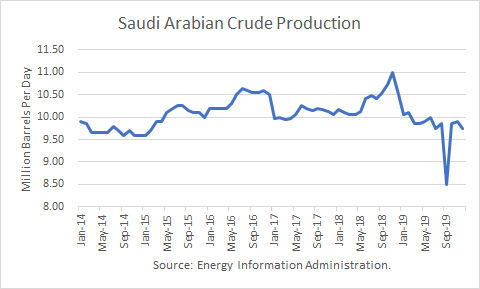 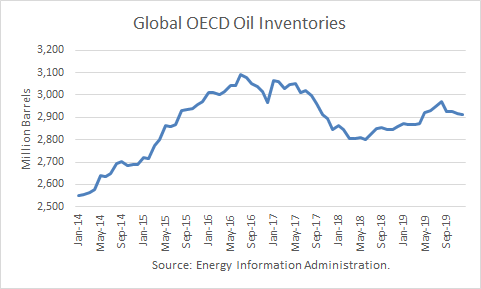 It was an ill-conceived idea. In the United States, bankrupted firms’ assets are bought by other firms at bargain basement prices. The oil does not disappear.

It was OPEC’s $500 billion blunder the first year alone. And Ali Naimi got the retirement for which he had asked.

Don’t Forget the “Other Supply” and Other Non-OPEC Gains

All eyes also need to look at “other supply” in the U.S. petroleum supply, not just crude oil production. Other supply includes natural gas plant liquids, renewable fuels and refinery processing gains. I explained here why they are integral to petroleum supply. 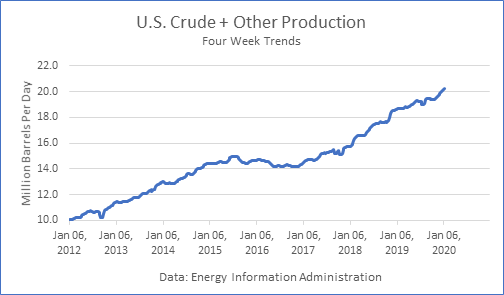 All eyes also need to watch production beyond U.S. shores. The EIA is forecasting non-OPEC production to average 68.12 million barrels per day in 2020, 2.6 million more than in 2019, with gains in Norway, Guyana, Brazil and Canada. That is against a gain in global demand of 1.3 million.

There is little doubt that 2020 is going to be another year of ample global supplies. 2021 may possibly have demand exceeding supply, but not if sanctioned barrels from Iran or Venezuela come back into the market. Iran could put 1.5 to 2.0 million barrels per day back into the market if sanctions are lifted in a new nuclear deal. And Venezuela has budgeted an increase of 600,000 b/d this year with help by Rosneft (OTCPK:RNFTF) (OTC:OCRNL) to reinvigorate their production. PDVSA’s output appears to have stabilized over the past 3 months following an ongoing decline.

To guide investors who are interested in profiting from outstanding opportunities in the energy sector, I provide a service on Seeking Alpha’s Marketplace oriented toward individual investors, Boslego Risk Services. A long/short Model portfolio is continuously updated, along with on-going analysis of the oil market.

I am now accepting new members to Boslego Risk Services and invite you to sign-up. There are monthly and annual pricing options as described here. You may also read reviews posted by members here.