The Underlying Business Vs. The Investment Thesis

It’s never been a better time to own warehouse and logistics real estate. As Black Friday results roll in this year, it has become painfully clear (especially to owners of retail real estate) that online sales are disruptive and here to stay. Online sales this year came in at an all-time high of $7.4 billion, rising 19.6% year-over-year.

The rise of e-commerce has been rough for dividend growth investors, as most online retailers pay no dividends and thus it’s difficult to find ways to play this trend while sticking to our investing strategy. Today, I offer the case for one such investment opportunity, albeit one that is not a good value today.

EastGroup Properties (EGP) is a real estate investment trust that owns and develops distribution centers in the sunbelt region of the United States, primarily concentrated in Texas, California, Arizona, Florida, and North Carolina. The vast majority of the portfolio (88%) is comprised of multi-tenant business distribution facilities which combine roughly 10-25% office space and 75-90% warehouse space by square footage. Properties are clustered in 13 of the 15 fastest growing markets in the nation.

EGP’s portfolio is well-positioned to ride the powerful tailwind of e-commerce growth going forward. The only problem, as we will see, is that everyone seems to know this, and the stock price more than reflects it. As such, EGP is currently a solid HOLD. I give my target Buy price below.

EGP has purposely positioned its portfolio to benefit from the growth of e-commerce, although not all of its tenants are directly involved in the delivery of products to consumers. Some of its tenants are fundamentally brick-and-mortar businesses that have switched to omnichannel models. Others are online-only retailers that operate merely through a website and the industrial space rented from EGP. In its 2018 annual report, the examples are given of retailers using EGP’s space for numerous daily deliveries and pharmacies storing drugs as last-mile fulfillment centers.

While other warehousing REITs tend to focus on larger (250,000+ SF) spaces at the edges of metropolitan areas, EGP concentrates on relatively smaller (80,000-130,000 SF) spaces near transportation hubs that are ensconced directly in the path of population growth. Given EGP’s strategic focus on fast-growing markets in the South, Southwest, and Southeast, this sets up the REIT for long-term success.

EGP has developed 209 properties since 1996. Nearly half (46%) of its current portfolio was developed internally. It currently has 26 development projects ongoing in 11 cities.

Partially as a result of these development projects, EGP has a portfolio of relatively new buildings that are 97.9% occupied. The landlord has a remarkable ~1,500 tenants occupying an average space of 26,000 SF and a weighted average remaining lease term of 5.8 years.

Given the current 2.2% dividend yield and the average interest rate on fixed-rate debt of 3.6%, the real-time, weighted cash cost of capital is an ultra-low 2.44%. Using the 4-year average yield of 3.19%, however, the WACC comes to 3.26%. In any case, EGP enjoys a very low cost of capital compared to the 7%+ effective yields on its development projects. 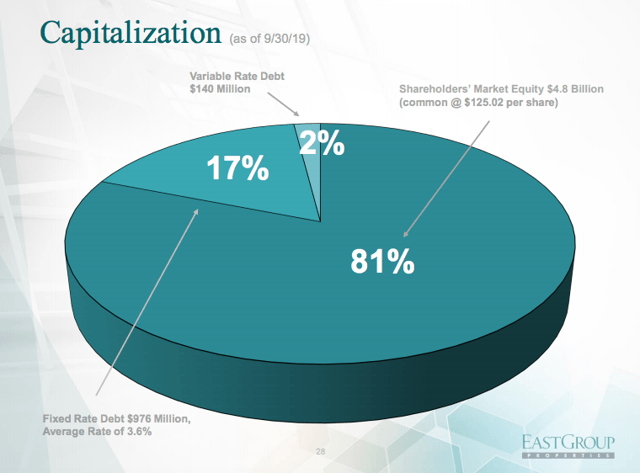 EGP’s leverage ratio (long-term debt-to-EBITDA) sits at around 5.5x, which is higher than I expected given its very high equity percentage of capital. But the ratio, along with interest coverage of 3.5x, is at a comfortable and safe level.

EGP currently trades at a price/FFO of 25.95x, compared to a P/FFO of 18.06x at the beginning of the year. This multiple expansion reflects faster growth as well as the expectation of even faster growth with the continued explosion of e-commerce.

However, rather than being priced for a short burst of fast growth followed by a longer period of moderately fast growth, which is more likely, EGP seems to be valued for parabolic growth. Its price measured against revenue is ~50% higher than the peak reached prior to the Great Recession, and against cash flow from operations, it’s 32% higher.

Free cash flow, more volatile than the previous two metrics, is the highest its been in the post-recession period, and by a significant margin.

These valuation metrics combine to paint a picture of an overvalued stock, even if the underlying business is performing well and increasing its pace of growth.

Unlike most of its industrial and distributional peers, EGP did not cut its dividend during the Great Recession and has actually raised or maintained its dividend for 27 years straight.

This is a testament to management’s careful and conservative capital allocation, as well as to the mix of cyclical and defensive tenants to whom EGP leases. Free cash flow per share has consistently covered the dividend in the post-recession period, and coverage seems to be expanding.

In fact, the payout ratio based on FFO is around the lowest it’s been in the past two decades. 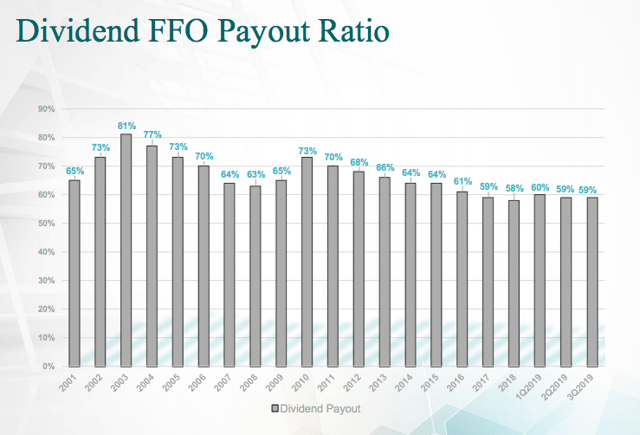 If the dividend continues growing at its average rate of ~5% over the last five years, buying in at the current price would render a 10-year yield-on-cost of 3.6% — not terribly exciting. Even if growth comes in closer to the most recent raise of ~8%, the 10-year YoC would be 4.75%.

I like the idea of building a position in a distribution REIT that will give my portfolio exposure to e-commerce. This exposure should act as a counterbalance to retail-related REITs and other corporate stocks. However, I just can’t justify an investment in the stock at these valuation levels.

If the stock price fell to the point where it yielded 3.5% while the business fundamentals remained sound, I would be a happy buyer of shares. Of course, that would require the stock price to fall to $86, or down 36% from the current level.

EGP is on my recession watch list, but for now the stock is a solid HOLD.