Agriculture Futures To Continue Trading Within A Range With Weather, Export Sales, Inspection, And Trade Weighing

Agriculture Futures To Continue Trading Within A Range With… 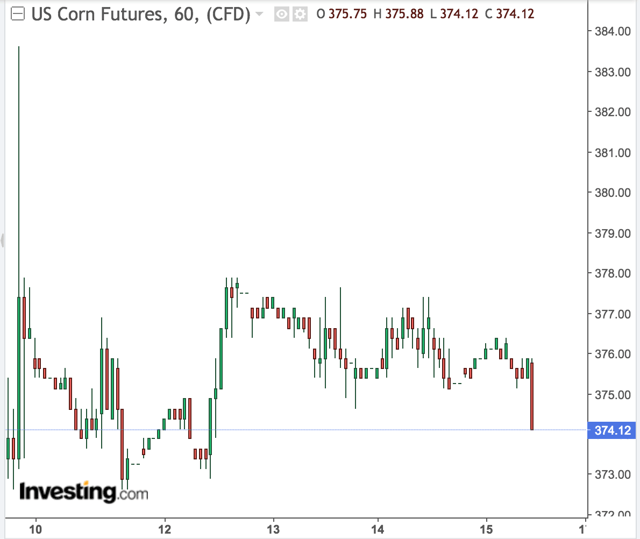 Figure 2 below is a price trend chart of the front-month December futures contract for wheat over the past week. Figure 3 below is a price trend chart of the front-month November futures contract for soybeans over the past week. 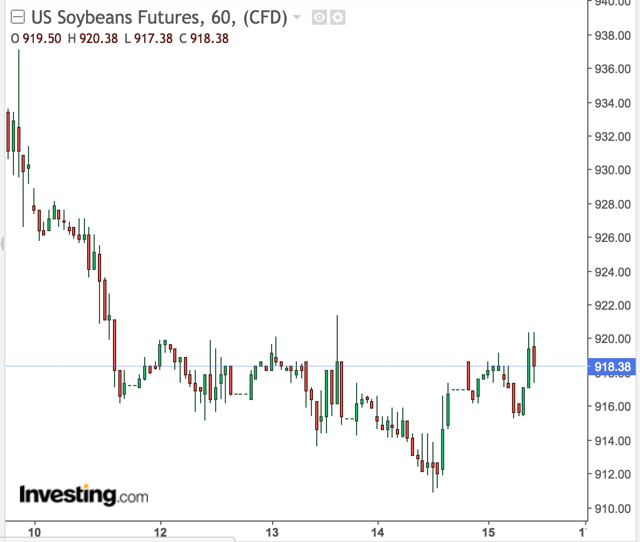 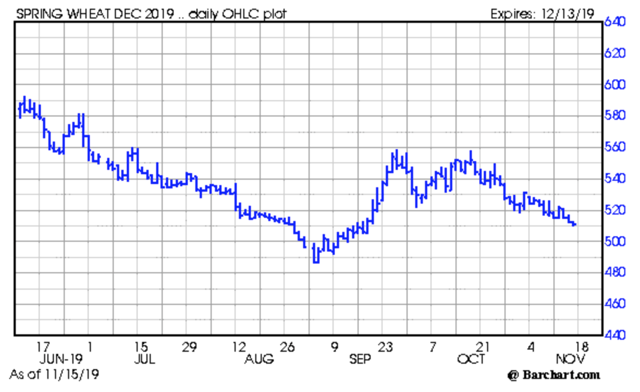 U.S. crop net export sales come in line with expectations; corn and wheat on the lower end while soybeans on the higher end; some 761k metric tons sent to China

Forecast models have been mixed/varied in the handling of the temperature pattern with the American GFS being the most aggressive with the cold and the European ECMWF being the mildest. Using a blend of forecast solutions, we should see a continuation of below-average temperatures over the course of the next 15 days though we will see temperatures moderate/warm from the recent extreme/record cold and anomalies in the 6-15 day running closer to normal, well within the typical bounds of below average.

Overall, forecast models have trended slightly colder over the next two weeks. The colder changes have mostly occurred in the 6-15 day time frame. This has been a consistent trend over the past few weeks now where temperatures initially warm out in the 8-15 day time frame turns colder as we move closer into time.

Over the next 10 days, forecast models are showing persistent/perpetual ridging developing over the eastern Pacific/Gulf of Alaska into the western coasts of Canada and the U.S. The upper level ridging over the eastern Pacific continues to be something of interest heading towards the winter season as it looks to be an atmospheric response to the anomalously warm waters over that region. The atmosphere continues to feed off of those warm waters triggering this persistent ridging. This is of special interest given that we don’t have an El Nino present this time around. At the same time, ridging is also being seen developing over Greenland over the next 10 days. These developments will help to keep the upper level pattern amplified (though not to the levels from the recent cold) and ultimately troughing over the central and eastern U.S. that will allow for the continuous transport of cold air into the central and eastern U.S. Because the ridging is not as strong or deep (reaching the Arctic/Alaska/eastern Russia) and thus the jet stream pattern is not as amplified as the recent cold pattern before, the cold over the next couple of weeks over the central and eastern U.S. will be mostly of a Canadian origin and lesser of Arctic origin.

We will see temperatures moderate (returning closer to normal levels) over the next seven days across the eastern half of the country as the Alaskan ridge and highly amplified pattern wanes/breaks down, but temperatures overall will remain below average through most if not all of the two week period. Temperature anomalies in the 8-15 day time frame will be modestly cold compared to the recent extreme cold. Figure 5 below is a map from the 06z GFS ensemble depicting the 1-8 day (November 16-23) temperature pattern. 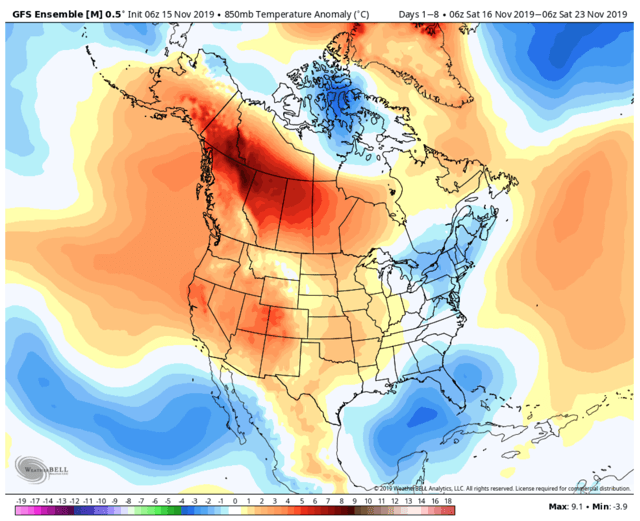 Figure 6 below is a map from the 06z GFS ensemble depicting the 9-16 day (November 24-December 1) temperature pattern. 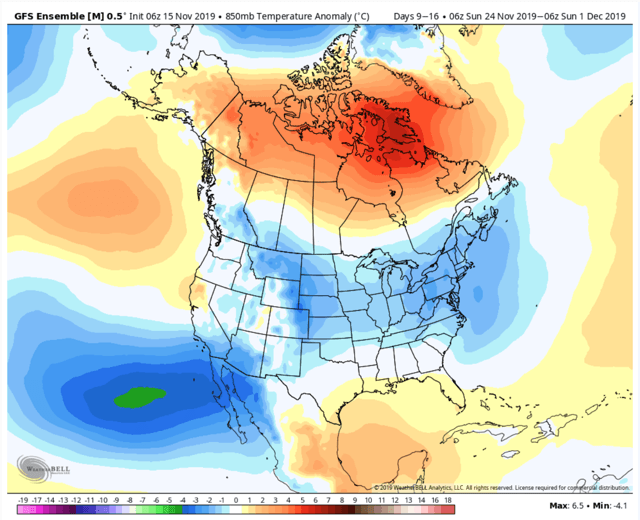 Tropical forcing also supports the colder pattern as the MJO is expected to be in a 7-8-1 phase over the next 7-10 days or so. All mentioned prior ultimately supports a +PNA/positive Pacific North American Oscillation, a -AO/negative Arctic Oscillation, and a -NAO/negative North American Oscillation for at least the better part of the next two weeks. Figure 7 below is an image depicting the MJO index forecast over the next couple of weeks. 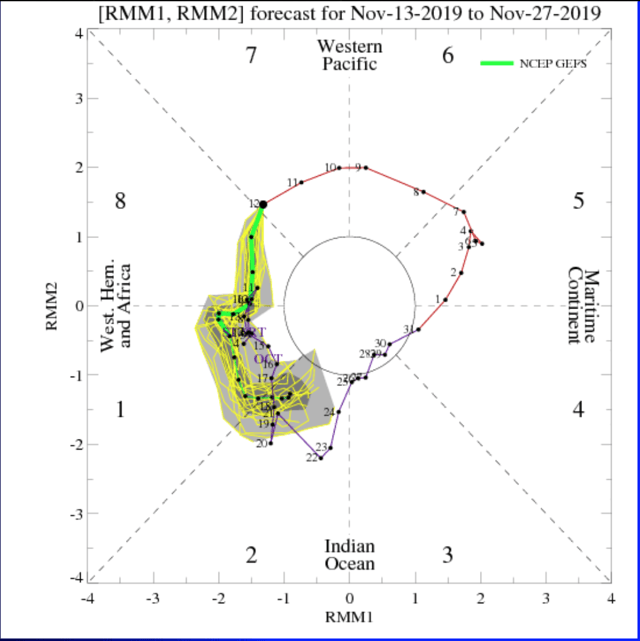 An overall dry pattern will remain in place over the next two weeks as the upper level flow pattern will consist of a split-flow (Rex Block) just off the west coast of the U.S. and the development/amplification of a trough over the eastern half of the country. Not only will this result in a colder-than-normal pattern to the central and eastern U.S. as discussed above, but will come with periodic chances of low profile/light precipitation (rain/snow mix) from primarily weak clipper disturbances tracking across the central U.S./grain belt. Figure 8 below is a map showing the seven-day accumulated precipitation forecast (Friday morning to next Friday morning) across the Lower 48. 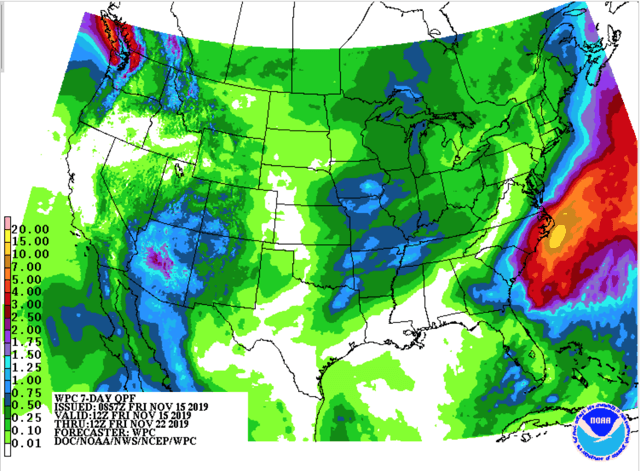 Figure 9 is a map from the 06z GEFS depicting a drier-than-normal pattern across much of the country in the 2-8 day time frame (November 16-23). 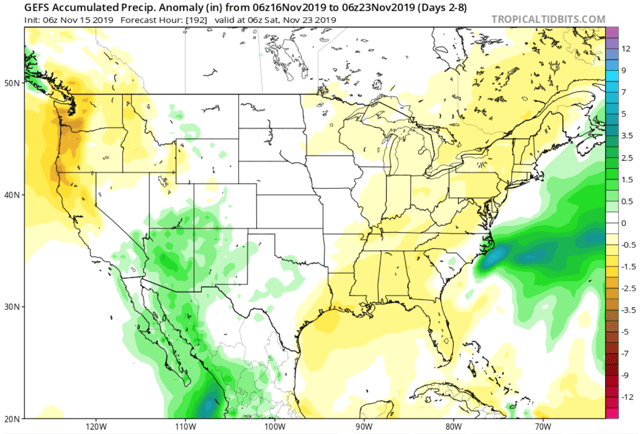 Figure 10 is a map from the 06z GEFS depicting a normal to drier-than-normal pattern across much of the country in the 8-14 day time frame (November 22-29). 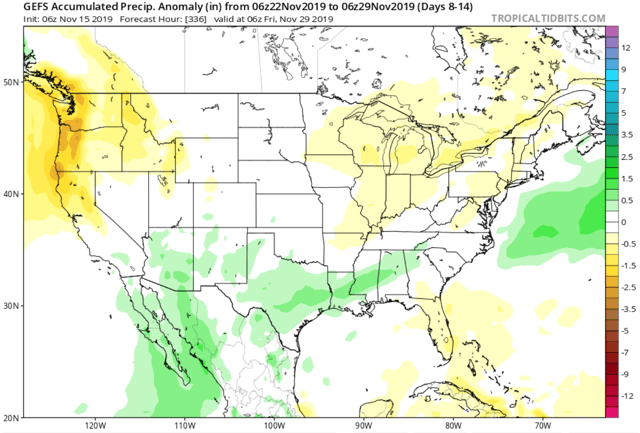 Improving weather conditions (drier and milder) will support downside risk to prices for the crops that have yet to be harvested or planted. Wheat and corn net export sales came in line with expectations though on the low end, providing additional downside pressure. Soybeans came in line, but on the higher end giving upside support. This explains why corn and wheat are both trading lower on Friday while wheat is trading higher. Grain prices overall in the days ahead will continue to trade sideways/mixed with weather, inspections, export sales, and trade weighing.