Passive investing has enjoyed a tremendous rise in interest and popularity from investors over the past decade. Following that rise, the number of passive investment products, like index funds and ETFs, has also taken off. So much so that some fear passive investing is the next big bubble to burst. We’ll take a closer look at the argument in this article.

The passive bubble argument can be summarized as follows.

Some well-respected investors, like hedge-fund manager Michael Burry, believe the rise in passive investing resembles the frenzy that led to the financial crisis of 2007 to 2009. Here is Burry in his own words from a Bloomberg interview, “This is very much like the bubble in synthetic asset-backed CDOs before the Great Financial Crisis in that price-setting in that market was not done by fundamental security-level analysis, but by massive capital flows based on Nobel-approved models of risk that proved to be untrue.”

It’s understandable why there is concern about passive investing. There’s no doubt there’s been a substantial rise in the number of passive investments and their AUM over time. There are plenty of scary statistics thrown around about how the passive world looks bubbly.

For example, here’s a chart from wsj.com showing eye-catching growth in the percentage of US equity market cap held by index funds. 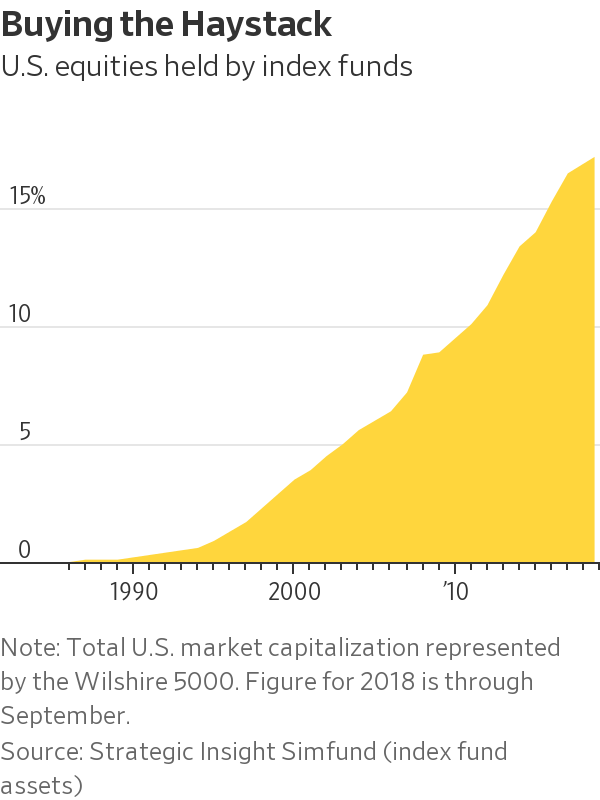 And here’s a chart from businessInsider.com showing a parabolic rise in the number of indices (versus stocks) over time. 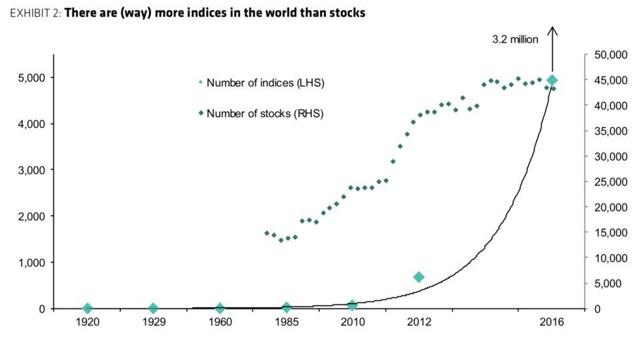 These charts look shocking but they can also be misleading without proper context. For perspective, look at the following chart from Morningstar that shows the relative percentage of index-based versus actively-managed funds based on assets. 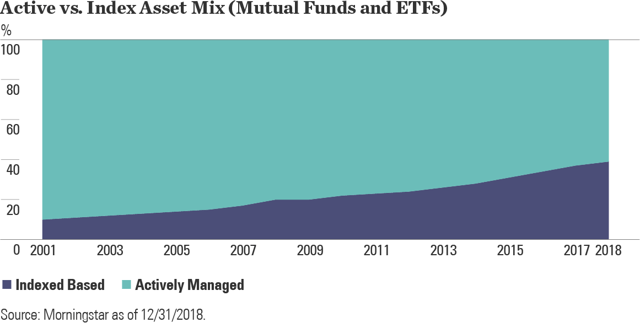 Yes, index-based products have risen in popularity over time, but the rise looks less extreme than the first two charts suggest. Also, investors still have the vast majority of their assets in actively-managed products like traditional mutual funds. The point is the move into passive investments doesn’t look like a sudden, extreme spike based on speculation, rather it looks like a steady, decades-long paradigm shift likely driven by investor preference and technology (more on this later).

That’s not to say the shift to passive won’t cause problems. I think one thing passive critics are right about is the rise of market inefficiency. This seems counterintuitive because market efficiency is a primary justification for using passive investments (i.e., many active investments don’t beat the market).

The irony is the more people use passive investments, the more likely there will be market inefficiencies. This happens for at least a couple of reasons. First, the nature of passive investing (indiscriminately buying and holding everything) means too many passive investors will lead to at least some securities being mispriced (e.g., a worthless company is bought sight unseen due to being included in an index).

Second, technology has enabled investors to be overly-active with their passive investments. In theory, better technology should increase market efficiency. However, it also allows investors to act on their worst instincts and knee-jerk reactions in real-time like never before.

Investors today can buy or sell entire markets (using passive products) with a tap of their mobile devices (for “free” even) and trades are executed at the speed of light by supercomputers. The result, markets increasingly reflect the irrational whims of fear and greed instead of logic and rationality.

Some market data seems to support this view. The chart below from forbes.com shows daily market volatility for the DJIA over time. As expected, market volatility plummeted from its early days as investors and markets matured. However, since the 1970s volatility has crept back up as markets increasingly modernized (probably just a coincidence the first index fund was created in 1975). 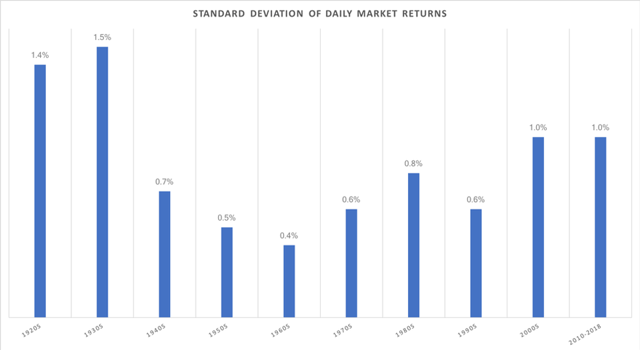 Whether we’re considering market efficiency, distortion, or volatility, it all boils down to one real concern. Are market prices being artificially inflated by the rise of passive investing? In absolute terms, I’d say yes. Again, it’s hard to believe decades of indiscriminately buying broad market indices haven’t affected market prices.

One way to evaluate the question is by looking at valuation. Extreme overvaluation is one thing that consistently precedes major market crashes throughout history. Whether we look at the dotcom bubble of the 1990s or the great financial crisis of the 2000s, all were preceded by market prices that reached levels Alan Greenspan labeled “irrational exuberance.”

Consider, for example, the chart below from Robert Shiller’s aptly named book Irrational Exuberance. The red line shows the level of inflation-adjusted home prices in the US. Prices shot off the charts before the GFC (to 185%). The near-vertical moves were clearly extreme and irrational. 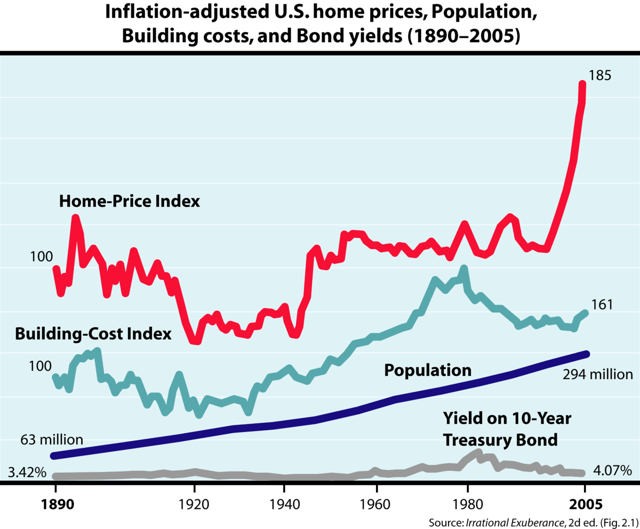 Next, let’s consider the current US stock market valuation. The chart below shows the price-to-earnings ratio for the S&P 500. As with housing prices, there was an extreme spike in P/E before the GFC. Currently, the P/E stands at about 22x. To be clear, 22x is elevated and about 38% above the long-term average value of 16x. What’s more, the P/E has remained stubbornly above average for years.

I think it’s fair to attribute at least some of the elevated valuation to passive investing, like a virtual cushion of stock demand from passive funds. In addition, the price distortions may be worse in more opaque corners of the financial markets, like micro-cap stocks or high-yield emerging market bonds.

These markets lack depth and liquidity and yet the rise in passive investing has enabled more capital to enter them (via index-based products) than would otherwise be possible. I can see how a sudden unwind would be quite unorderly in those dark corners.

However, it’s also true that the majority of passive-investing is tied to larger, deeper, and more liquid indices like the S&P 500. At the same time, it’s also unfair to say broad equity market prices are as extreme or irrational as they were before the GFC or the dot.com bubble, it’s not even close.

Yes, there are similarities between the proliferation of CDOs in 2006 and the rise of index funds today – growth in AUM, the use of derivatives, etc. It’s also likely the rise of passive investing (aided by technology) is affecting market efficiency, creating wider, more volatile price swings (driven by investor behavior), and contributing to elevated stock market valuations (which are indeed high).

However, that’s not the same as saying index funds are causing an equity bubble that is pushing market prices to the same extreme levels of 2007 or 2000. The bottom line is there are many reasons why we could see another big drawdown in the markets. And while passive investing could exacerbate the sell-off, it’s unlikely to be the cause of it. There are just too many other, more ominous threats than “too many index funds.”

Crushing It: A NICE Investment…