The Habit Restaurants Inc. (NASDAQ:HABT) is among a number of restaurants that IPO’d over the past decade, riding a wave of growth in the quick service segment. The company has a history dating back to 1969 in Santa Barbara, California. Habit now has 255 locations primarily in western states, but has also expanded to the east coast and even internationally with 4 restaurants in China. Habit maintains a theme of a laidback “California vibe” heritage with an emphasis on quality flame-grilled burgers. I’ve had positive experiences as a customer and think it’s an overall good concept with a great-tasting burger but nothing revolutionary. This article highlights my concerns of the stock as an investment that comes down to valuation. The stock appears fairly valued based on the current outlook, while risks appear tilted to the downside. I rate the HABT as a “Hold” considering my view of limited near-term upside, but not a good short candidate or presenting any apparent reason to sell.

The following points make up my bearish case for The Habit Restaurants:

The company reported fiscal Q1 earnings May 1 with non-GAAP EPS at -$0.01 and revenue of $108.17 million beating expectations by $2.6 million. The balance sheet has no long-term debt, although the current ratio is trending lower at a last-reported level of 0.64. Company-operated comparable restaurant sales increased 3.2% as compared to the first quarter of 2018. Adjusted EBITDA of $7.7 million was roughly flat compared to $7.6 million for the first quarter of 2018. Overall, the numbers were good but not great. The stock rallied an incredible 30% in the span of just a few weeks between April and May to a high of $13.00, but has faded that run-up and now trades up just 3.4% YTD 2019. Declining same-store sales were a concern in early 2018, but the more recent positive readings have given a boost to sentiment. Management notes the menu-level strategic initiatives and marketing as driving the apparent turnaround from early 2018.

2019 revenue guidance between $460.5 million and $464.5 million implies growth of about 15% for the year, which is another deceleration compared to 2018. This growth is from a combination of approximately 30 new stores, increasing the count by 12% and another 3% from same-store sales. The restaurant contribution margin outlook of 16.25-17% continues the pattern of overall low profitability. The market needs to see upside to these numbers before the share price responds to move higher. I believe the estimates are fair, but downside risks to the targets could send the stock price lower if future growth needs to be reassessed from a potential underperformance. 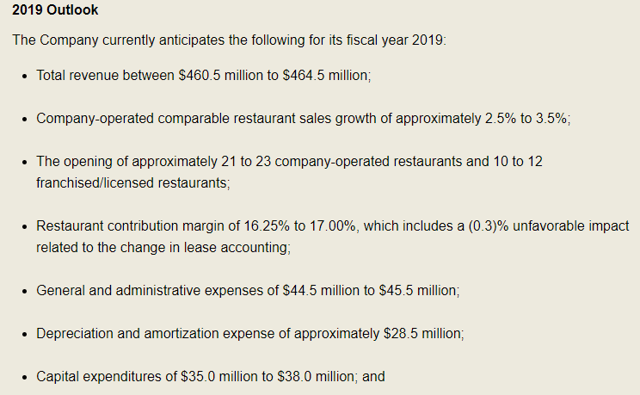 Despite the more recent positive numbers, HABT has been a poor performer over the past year down nearly 40% from its 52-week high of $18.30 per share set back in September 2018. Shares are extremely volatile, which I base on being related to an otherwise poorly understood company that is stuck between high growth and not quite a value stock. Growth has been decelerating compared to annual rates above 40% when the company launched its IPO in back in November 2014 at $18 per share. Quarterly revenue growth of 17.65% in the latest quarter is just not that impressive compared to the other high-flying restaurant stocks. Two things that the market values highly in “growth” stocks are accelerating sales and strong margins, two points which HABT is unfortunately missing.

The bigger issue I see for the stock is that the concept is proving to be less profitable overall, with lower margins compared to nearly every other restaurant stock. HABT’s gross margin at 18.1% and operating margin at 1.8% over the trailing-twelve months is lower than those of most other companies in the group. A large portion of this discrepancy is based on the fact that many of the larger and most established restaurant brands have a higher mix of revenues coming from higher-margin franchise locations. While Habit is adding franchisees, company-owned locations remain the largest and most important part of the business, as it builds brand awareness. The Habit Restaurants today is known by its customers for their quality burgers at an affordable price with excellent service, but unfortunately, that’s not a combination that has been rewarding for shareholders. 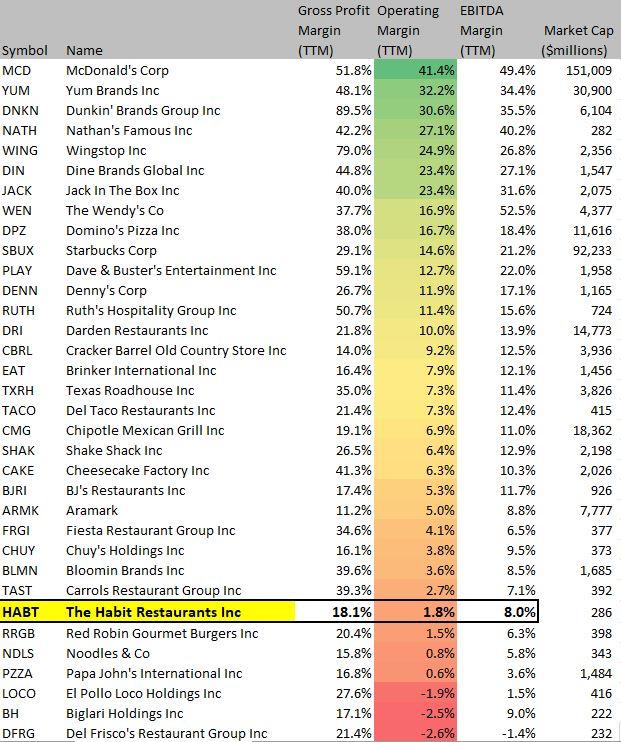 The company notes in the latest conference call that it values its labor force by offering training and development. Good-to-decent wages are great for employees, but again, this goes against the bottom line.

An elevated guest experience is another differentiation factor between us and our peers. To that end as the battle for attracting and retaining quality team members becomes even more intense, we continue to focus on the professional development of our people through the use of technology as well as additional leadership and training resources. We believe our people are certainly the secret sauce in everything we do.

During the same Q1 call, management also noted that it expects costs to remain elevated through the current fiscal year:

As a percentage of revenue, occupancy and other operating expenses increased to 19.8% in the first quarter of 2019 from 17.4% in the comparable quarter of 2018 primarily due to higher call center, on-line and delivery costs as we rolled out the option of delivery in the majority of our restaurants in the second half of last year. In addition, there were higher common area maintenance, rent and advertising costs in the current period as a percentage of restaurant revenue. We expect to see higher rent and delivery costs to continue in the current fiscal year.

Habit screens well as a potential value pick given no long-term debt, double-digit revenue growth, and low multiples in some metrics: 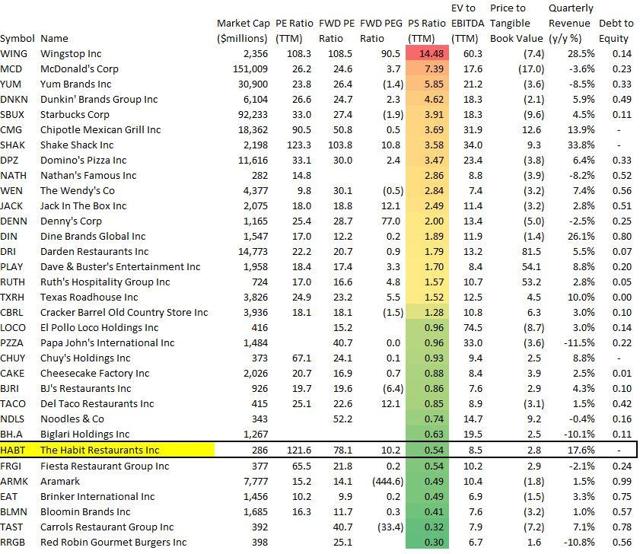 I believe the structurally lower margins of the Habit concept and its small relative size with a market cap of $286 million are the main reasons explaining the stock’s apparent discount to peers in the market. With price-to-sales at 0.54x and EV-to-EBITDA at 8.5x, HABT is one of cheapest stocks in the industry, well below the average for restaurants. I believe this spread is justified considering the company has one of the least profitable business models. At the end of the day for a restaurant, unless you have lines out the door or rock-bottom costs, it’s going to be a tight-margin business. Habit has not proven able to break through among a sea of consumer dining options.

On the other hand, a price-to-earnings ratio of 122x and forward P/E of 78x clearly highlights the premium the market assigns to the future potential. This is where I see the valuation stretched and expensive for what investors are paying. Consensus estimates look for the company to post flat EPS around $0.14 per share for the next two years. This implies a price-to-earnings growth of 10.2x.

Overall, the trading multiples here are just part of the story, but there are enough weaknesses to see the long-term risks considering the company would be exposed to a potential cyclical slowdown. The table below summarizes what I view as the basic strengths and weaknesses of The Habit Restaurants stock currently.

Looking 5 to 10 years down the line, there is little reason to expect significant margin expansion from where the company is currently generating. The numbers feed into a low return on equity and sustainable growth. HABT has some favorable trends, including current positive same-store sales, but not enough to get excited about, in my opinion. Consensus estimates see flat earnings growth over the next two years at $0.14 for the fiscal year 2020, up from $0.13 in 2018.

The company has no current long-term debt and is free cash flow-positive, which is a much better position than many stocks in the market. Considering free cash flow of approximately $7.2 million over the past twelve months, if we apply a generous 6% FCF growth rate into perpetuity, coupled with a 9% discount rate, my simplified single-stage discounted cash flow model implies a fair value to the stock at ~$9.75, representing 11% downside from the current price. Being bearish on the stock simply requires you to be more skeptical of the long-term growth outlook from here. 11% downside does not make HABT a good short candidate, but with that said, weaker-than-expected results going forward would pave the way for more significant losses.

Longer-term challenges include fierce competition in the industry, rising food and labor costs, and the company’s exposure to cyclical trends that would be a negative in a recession type of environment.

I rate HABT as a “Hold” at $11.00 per share, essentially fairly valued here based on the current growth outlook. A breakdown below the $10.00 level in the near term will likely require a deteriorating signaled by declining same-store sales. Margins are the big story, and investors should look for upside. In my opinion, the company will need to provide a material and sustained improvement in margins for the stock to move significantly higher.

The purpose of this article is to put The Habit Restaurants’ valuation multiples into perspective. I urge investors not to compare HABT with another restaurant as apples-to-apples, but instead, to focus on the key challenges to its own organic growth. I would consider buying HABT if it made a significant move below $10 per share, all else equal, but would reassess the circumstances at that point.