Marathon Oil (MRO) has converted from an international E&P company to the U.S.-focused firm. Pondering the capex priorities and the future growth trajectory, MRO preferred to concentrate solely on assets with high cash margins and get rid of ones with burdensome opex. By now its portfolio is clearly U.S.-oriented; oil-producing assets in the Eagle Ford, Bakken, Northern Delaware Basin, and SCOOP/STACK in Oklahoma bring the bulk of revenue and cash flow. Portfolio structure was behind the 2018 revenue jump, a surge in cash flow, and the first full-year profit since 2015. In my view, in 2019 the company might have a relatively moderate upside if the tightening supply will support the WTI price. Considerable FCF as the firm’s virtue might support investor confidence. At the same time, I see no impetus for vertiginous growth, as analysts expect a slight decline in revenue in the current year accompanied by weaker profit.

In the 2013 Form 20-K, it was mentioned that Marathon Oil operated in Gabon, Angola, Ethiopia, Kenya, the Kurdistan region of Iraq, Libya, Norway, the U.K., Canada, Poland, and the U.S. You will not find the majority of these countries in the 2018 Form 10-K, as the company discontinued operations in practically all of the above-mentioned regions except the U.S. (mainly the Eagle Ford, Bakken, Northern Delaware, and Oklahoma) and Equatorial Guinea. Instead of pouring millions of dollars into the exploration and development abroad, Marathon decided to stay laser-focused on the most valuable assets in the U.S., generate cash surplus and reward shareholders; proceeds from divestments were used to fortify the balance sheet and return cash to shareowners. The firm has become risk-averse deciding to exit the regions with risky operations such as Libya and the Kurdistan region of Iraq. Marathon Oil Libya Limited was sold in Q1 FY18, while Marathon Oil KDV B.V. is classified as held for sale. Apart from that, in February 2019 it exited such a stable and predictable region as the North Sea, selling all the UK assets to RockRose Energy and leaving the 9th country in 5 years. The U.S. portfolio has also undertaken massive rebalancing, as MRO sold a few assets in Colorado, Wyoming, and the Gulf of Mexico. In 2018 after constant rebalancing MRO had 1,281 mmboe in total proved reserves (or 1,254 adjusted for TPR in the UK and Kurdistan) compared to 2,171 mmboe in 2013. It is pertinent to note that synthetic crude oil is no longer in the firm’s portfolio, as low-margin costly oil sands operations in Canada were ceased to lower opex. Ultimately, after proactive portfolio recalibrating, average production cost per unit went down from $14.47 in 2013 (see p. 21) to $8.68 in 2018 (see p. 10) boosting operating profitability and cash flow. TTM earnings of the company turned positive only in September 2018; before then since June 2015 it has been deeply in the red. In 2018, Marathon Oil had a spectacular revenue jump from $4.36 billion to $5.84 billion spurred by expensive WTI, combined with both robust cash flow generation and substantial accounting profit. For broader context, I should note that in FY13 the company had revenue of $11.38 billion.

One facet of Marathon Oil I highly rate is its operating cash flow margin of 55%. Such peers as Hess (HES), Pioneer Natural Resources (PXD), Chesapeake Energy (CHK), and Noble Energy (NBL) have CF margin of only 31.5%, 23%, 19.8%, 23%, and 46.9% respectively. But the gist is that high capex directed primarily to assets located in the U.S. (300 wells in 2018 compared to 1 in Equatorial Guinea) consume ~85% of cash generated by operations. However, in 2018 the company had positive levered FCF of $481 million with FCF margin of 8.2%. It is also worth reminding that in 2013, when WTI price was more than favorable, Marathon had only $478 million left after financing PP&E and exploration. Here I should note that the company’s methodology of organic FCF calculation differs from the one I most often use. To calculate levered FCF, I take net CFFO and deduct additions to PP&E and other assets from the consolidated CFS. Contrarily, MRO deducts development expenditures, dividends, and a few other items. As a result, it reported organic FCF of $868 million. Here the firm’s preferable approach is explained in greater detail.

Marathon promised to increase 2019 total production by 10% and invest $2.6 billion in development and REx (resource play leasing & exploration). Most of capex is allocated to the Eagle Ford and Bakken. To consider what to expect from the top and bottom line performance of the company in 2019, I have taken a closer look at analysts’ consensus estimates. It appears that revenue is anticipated to equal ~$5.65 billion, while, importantly, OCF could decrease only 0.3%; consequently, the OCF margin will even go up. 2020 revenue is expected to equal $6.54 billion. 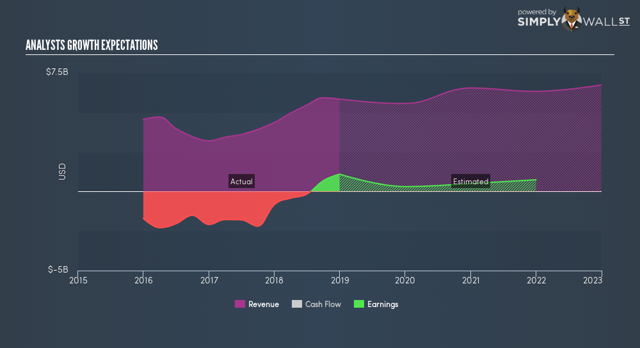 Data from Standard & Poor’s Capital IQ. Revenue is calculated as a sum of Revenues from contracts with customers and Net loss on commodity derivatives. 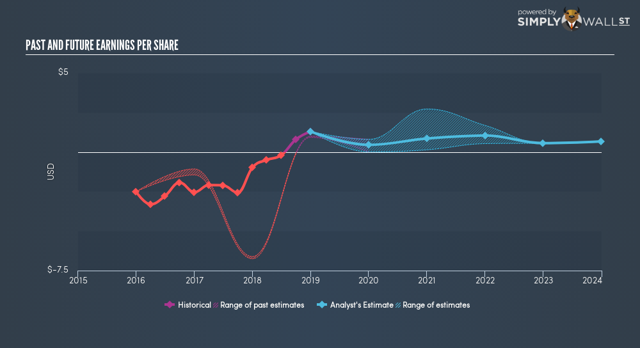 Most importantly, during the Q4 earnings call the CEO promised that Marathon would remain organic FCF-positive (after dividends) even with WTI of $45 per barrel. Besides, if WTI surpasses $50/bbl, MRO will generate $750 million in cumulative FCF in 2019-2020 and spectacular $2.2 billion in case oil benchmark will equal $60. At the moment rebounded West Texas Intermediate price is close to that level.

I have selected a few U.S. E&P companies I consider as comparables to figure out if Marathon Oil is too expensive or too cheap among the peers. The comparable companies are:

The picked firms have similar revenue, cash flow, nature of operations, capital spending, and regional mix of producing assets. In 2018 all selected companies had quite alike capex, while Noble Energy and Continental Resources had investment expenditures higher than the group median ($2.72 billion) by 7% and 20% respectively. It is worth noting that after protracted portfolio rebalancing business model of Marathon Oil is less similar to Hess and more akin to, for instance, Continental Resources because MRO curtailed practically all operations abroad. 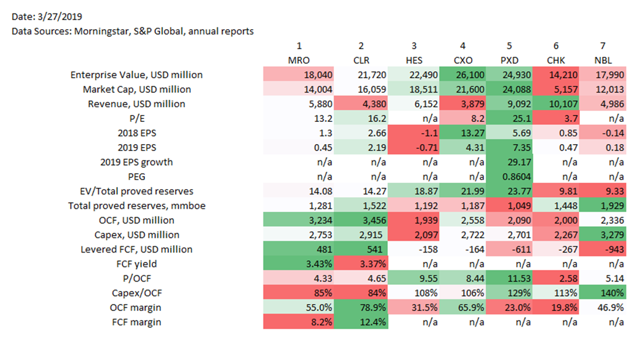 Note: 1) Revenue of MRO was calculated as a sum of Revenues from contracts with customers and Net loss on commodity derivatives. Total revenue was $6.58 billion. 2) Green cells indicate the highest points in the dataset, red – the lowest.

The takeaways are as follows:

Regarding dividends, MRO is in-line with three key peers, but still far from the dividend champions as (RDS.A, RDS.B) and ExxonMobil (XOM). Of course, it is not coincidental taking into account Capex/Revenue and Capex/OCF ratios of these upstream players.

In sum, Marathon Oil’s virtues are low EV/EBITDA and positive FCF. Besides, its buyback program has ~$800 million left (see p.25), yet to be spent in 2019. At the moment analysts do not expect 2019 EPS to increase, while revenue could go up if another oil market meltdown will not strike suddenly. All in all, I suppose MRO has moderate upside potential closely correlated with WTI price movements. Apart from that, with $5.49 billion in total debt and EBITDA of $4.1 billion, the company has a decent total debt-to-EBITDA ratio of 1.34x, which indicates firmness of the financial position and low balance sheet risk. Marathon is obviously not immune to the headwinds of the commodities market and the WTI volatility. As the Financial Times told in the recent article on the oil market, hedge funds are bullish on the benchmark prices, while behemoths as Royal Dutch Shell and Glencore are moderately skeptical. So, adverse price swings could drag shares down.